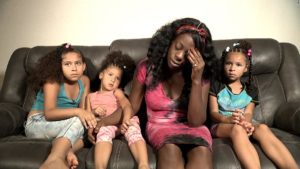 Sometimes you have to lie to continue the lies you’ve been lying about! The saga of the woman who went on CNN to speak about her upcoming eviction in Las Vegas and then raised over $200,000 has some crisp new drama added to the mix.

According to Las Vegas Review-Journal, Dasha Kelly, the North Las Vegas resident who appeared on a CNN program and used that national attention to start a GoFundMe account to raise money for her and her “children” to stave off an eviction, is now facing a lawsuit.

It was previously reported that Kelly was facing eviction and started a GoFundMe account to help with her mounting expenses. She appeared on a CNN segment with, who she said at the time, were her three children, and her life changed after a wave of support came her way. She raised $233,770 out of a $2,000 goal as she received overwhelming support.

After the funds were raised and news started spreading, CNN retracted the story and changed the original title after the young lady admitted that she was not the momma of the three girls who appeared in the CNN segment with her.

Now, the real mother of the girls, Shadia Hilo, has filed a lawsuit against Kelly. Earlier this week, Hilo alleged in the suit that she did not give Kelly permission to showcase her children on the CNN program. Hilo wants the donations received in the GoFundMe account to be placed into a trust for the three children who are 5, 6, and 8 years old.

“The three minor children…had been used as props to raise a large amount of money, all of which by rights should belong to them,” according to the complaint filed in Clark County District Court.

Hilo’s attorney Marc Randazza has stated that the money raised should be given to his client’s children.

“I believe those funds rightly belong to those three children,” said Randazza. “That is the essence of the lawsuit.”

In the meantime, in a statement last week, GoFundMe stated that the funds will be released after Aug. 23, minus any money refunded to people who request it. The funds have gone down to about $163,000.

The Next Metroid Should Take Inspirations From Indie Games