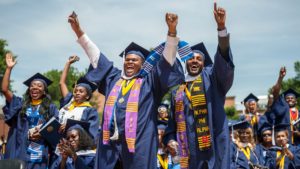 An HBCU in New Orleans, Dillard University plans to use a fresh $5 million gift to create civil rights and public interest internships for students.

The institution landed the largest of seven donations announced by a law firm that represented Maryland’s historically Black colleges and universities in a 15-year legal battle for equal funding, per US News.

The Kirkland & Ellis law firm is donating $12.5 million to colleges and nonprofits from the fees it was awarded when the case settled, according to the Baltimore Sun.

The case was settled this year when state lawmakers approved hundreds of millions of dollars in extra funding for the HBCUs in future state budgets. The firm,  which took the lawsuit pro bono, is giving its share to HBCUs, nonprofits and community organizations.

The remainder will go to Howard University’s Thurgood Marshall Civil Rights Center, the Coalition for Equity and Excellence in Maryland Higher Education, and the HBCU scholarship fund of the African Methodist Episcopal Church Second District.

The law firm disclosed each recipient assisted with the case.

The gift to Howard University will create endowed and operating funds for the center’s racial justice and advancement program initiatives. That will include money for civil rights and public interest organization fellowships for students from HBCUs in Maryland and nationally.

The New Way to Retire: Start a Digital Business