Architectural studio Al Borde used blackened wood and a cement-coated canopy to form an observation deck and classroom in a protected natural area in southwestern Ecuador.
The project, called Learning Viewpoint, is located near Guayaquil in the Cerro Blanco Protected Forest – a six-hectare preserve with a tropical dry forest ecosystem.

Lifted above a hillside, the wood-framed structure serves as an observation deck and outdoor classroom, particularly for school groups that often visit the area.

Cross-shaped in plan, the overlook allows a teacher or guide to stand at one end and address students spread across the two lateral wings.

“The design promotes the collective experience of sitting in the front row,” said Al Borde, a Quito-based studio.

The overlook is the first project to be completed as part of a masterplan for the preserve. The architects saw it as an opportunity to test out technologies that could be applied in future structures in the park.

Standard pieces of lumber were used to build the overlook, and paint and other finishes were avoided. Instead, the team opted to char the timber using the Shou Sugi Ban technique.

“Its darkness is due to a vernacular Japanese method of wood preserving, where the surface layer is burned,” the team said. “This mineralizes and protects it from pests that could attack it.”

Topping the overlook is a tent-shaped canopy made of canvas and sprayed-on cementitious mortar – a high-strength coating that will help the canopy endure inclement weather and sunlight exposure.

The cement-covered canvas is a more sustainable option than concrete, the architects said, citing research from Guayaquil’s Holcim Innovation Center. 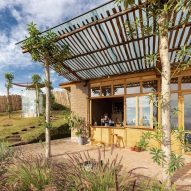 Through a lifecycle analysis, the centre determined that the cementitious canopy provides a 68 per cent reduction in a roof’s carbon footprint when compared to a concrete tile roof.

“This roof offers a great advantage over traditional roofs,” the team said.

The centre developed the cementitious coating in its quest to produce a textile that could act as an air-suspended “formwork”.

That said, materials such as this were first used after the first world war for marine engineering and geotechnical applications.

“Several prototypes were tested in the lab and on-site to achieve the best mortar projection system and the maximum allowable textile-catenary deformation – all of these before the final assembly of the Learning Viewpoint,” the team said.

Al Borde is led by principals David Barragán, Esteban Benavides, Marialuisa Borja and Pascual Gangotena. Other projects by the studio include a rural dwelling with rammed earth walls and a glass outhouse, and a renovated 18th-century home that has sleeping spaces suspended from the ceiling.

The photography is by Juan Alberto.