American studio Lever Architecture has revealed its proposal for the Portland Museum of Art campus expansion in Maine, with a design that aims to honour the state’s culture and history through design details and mass timber.

Renderings show a curved frame with expansive openings near the top. Terracotta and glass will be used for the exterior facing.

According to the studio, the proposed building’s curved roofline will frame the rising and setting of the sun in homage to the Wabanaki – the confederacy of four Indigenous tribes in Maine.

“Our teams’ perspectives on Wabanaki culture, community engagement, and universal accessibility were at the root of this design process,” said Lever Architecture principal Chandra Robinson.

“Maine’s natural beauty and welcoming community have been such an inspiration to the team, and we cannot wait to create a new museum that takes a giant step into the future and brings us all to a time and place that celebrates how art and the human spirit are intertwined,” said the studio. 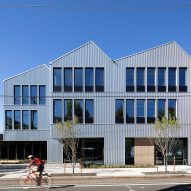 The interiors will feature large atrium spaces that open up the educational and gallery spaces. The mass timber structural elements will be visible as interior features, and additional wood details such as battens lining the underneath suspended walkways will be featured.

As well as being a strong and sustainable material option, the use of mass timber was intended to nod to Maine’s history in the lumber industry.

“Lever Architecture, and the team they have assembled, have demonstrated that they care deeply about our region’s future, our unique arts culture, and the needs of our community,” said Portland Museum of Art director Mark Bessire.

“They share our values of courage, equity, service, sustainability and trust, and we can’t wait to get to work with Lever Architecture and our communities to imagine Maine’s next great landmark.”

The design was selected from 104 entries in an international competition organised by Dovetail Design Strategists.

Lever Architecture, based in Oregon and LA, was chosen as the winning entry out of four finalists, which included proposals by Adjaye Associates, MVRDV, and a collaborative design from Toshiko Mori Architects, Johnston Marklee and Preston Scott Cohen.

The studio has completed a number of projects in the US, including an office building made from structural plywood and an adaptive reuse of a 1940s factory building.

Bitcoin price rallies to $19K, but analyst says a $17.3K retest could happen next