Brazilian architecture studio Debaixo do Bloco Arquitetura has built a concrete home in Brasília made up of three volumes, each lit by a central light well carved out of its angular roof.

Completed last year, the 300-square-metre residence was designed to provide a clear distinction between its various programme elements with a simple structural concept. Debaixo do Bloco Arquitetura, a firm based in Brasília and São Paulo, did this by dividing the home into three roughly equal blocks.

“A plot with three different levels and a simple structural system were the architectural starting points that defined the logic that this brutalist house was built with,” explained the architects.

Each of the volumes has an angular roof that pitches towards the centre, forming a light well. The roofs are supported by four internal columns, and four exterior pillars that are taller.

“This set of concrete structural elements delivers the architecture of the house, and stands out on the facade and in the internal environments,” said Debaixo do Bloco Arquitetura.

“The decision to leave them in their pure state, showing the material that they are made of, is intentional, so it is clear how the house was conceived,” they added.

Following the slope of the project’s site, the first cube-shaped volume contains the home’s communal areas. The architects laid out the living areas with a variety of seating arrangements surrounding the light well, which contains a small tree.

In addition to the roof’s concrete surface, which is visible throughout the residence, the architects included a variety of finishes that reference Brasília’s strong modernist heritage. 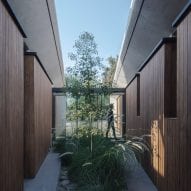 “The interior’s wood flooring and freijó wood panels warm the environment, and bring cosiness to a project where brutalism is present in its most rustic state,” said Debaixo do Bloco Arquitetura, who added that their goal for the interiors was “balance”.

A few steps down is an area referred to as the services block, which contains the kitchen and a guest suite. This area brings a touch of colour to the house, with green cabinets and furniture.

In the intermediate space between the kitchen and living room, the architects included a semi-circular nook with a breakfast table that offers a space for more casual meals.

Lastly, the bedrooms are located at the lowest point of the home. These rooms have tall glass walls that slide open, extending the resident’s quarters to a wraparound patio outside, which is partially shaded by the overhanging roofline.

Brasília is a modernist city that was designed in the 20th century by Oscar Niemeyer, Lucio Costa, and Roberto Burle Marx. Last year, Italian architect Carlo Ratti revealed plans for a tech campus designed as an extension to the iconic grid of the original city.

Debaixo do Blocos Arquitetura has also completed a renovation to a 1960s apartment in the Brazilian capital, opening up its layout to suit the growing needs of a young family.

The photography is by Joana França.

Save on Medicare With SHIP — State Health Insurance Assistance Programs