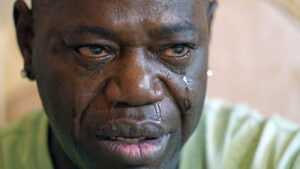 According to the Associated Press, which obtained the video, Bowman, a motorist, was pulled over for a traffic violation. Trooper Jacob Brown arrived on the scene after police pulled Bowman out of his car and threw him to the ground.

Brown jumped out of his car, took hold of his eight-inch aluminum flashlight, and began beating Bowman within two seconds of “initial contact,” according to reports.

Bowman can be heard screaming “I’m not resisting” between blows from Brown. The attack left Bowman with a broken jaw, three broken ribs, a broken wrist and a large cut to his head that needed six staples.

NPR reports that the attack came less than a month after troopers from the same agency punched, stunned and beat Ronald Greene, before he died in police custody. Green’s video also remained under wraps until the AP obtained and published it.

The Louisiana State Police do not appear to be standing behind Brown, releasing a statement Wednesday saying Brown, who resigned in March, “engaged in excessive and unjustifiable actions,” failed to report the use of force to his supervisors and “intentionally mislabeled” his body camera video.

Nola.com reported Brown didn’t report his use of force in the incident and mislabeled his footage as a “citizen encounter” in what investigators are calling “an intentional attempt to hide the video from any administrative review.”

Brown had 23 use-of-force incidents on his record, 19 of which involved a Black citizen. Brown now faces a federal investigation into his conduct as well as state charges of second-degree battery and malfeasance for the attack on Bowman. Additionally, Brown is also facing state charges in two other violent arrests of Black motorists.

That includes one in which he was caught talking to other troopers on social media telling them “it warms my heart knowing we could educate that young man.”

Despite not being seen hitting an officer in the video, Bowman still faces a litany of charges including battery of a police officer, resisting an officer and the traffic violation he was initially stopped for.