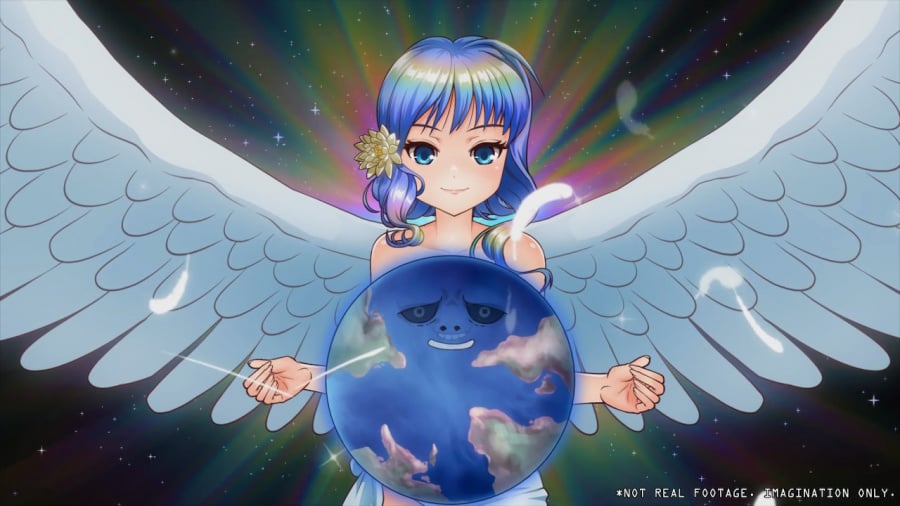 Visual novels and dating sims used to be hard to come by here in the West, especially on consoles. However, the Switch, with its portability and vibrant screen, has enjoyed a wealth of games in these genres over the years. One of the latest to make its way to the console is Love Esquire from publisher Mama Morin.

Originally developed for PC by Yangyang Mobile back in 2019, Love Esquire is the tale of a lowly squire who is desperate to lose his virginity by the time he is shipped off to war. He has four months to go from being a weird loser to a weird loser with a girlfriend. As is often the case in these games, there are exactly five eligible ‘bachelorettes’ in the whole city for him to choose from, each with their own gift preferences, schedules, and story to explore.

The ladies represent a few different tropes often found in these games. There is the stuck-up princess, the foreign visitor, the creepy nurse, the small but surprisingly strong fighter, and the player’s adopted sister (because of course she’s an option). All of them have their own story to tell, which gets unveiled through simple cutscenes that bring some of their mysterious behaviour to light as well as give the player a bit of fan-service for their trouble. 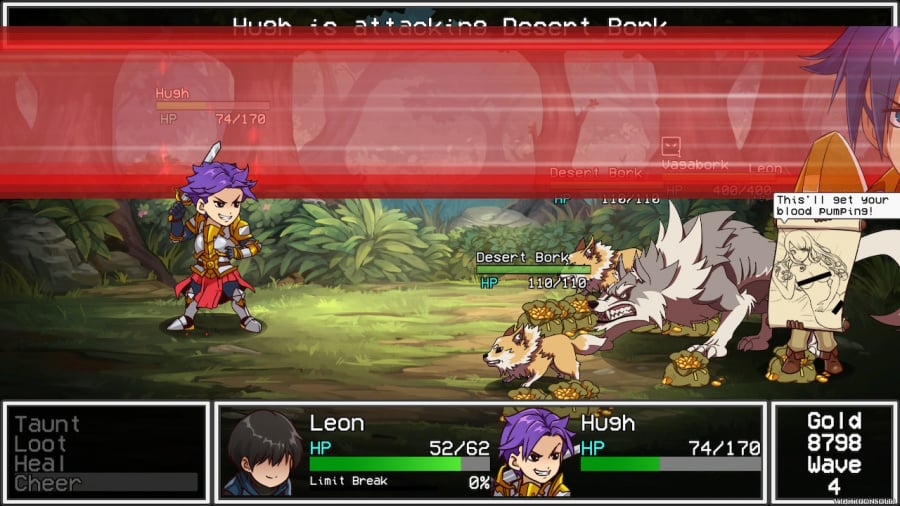 The production values in Love Esquire are surprisingly high. The art is all solid and enjoyable, even if much of it is recycled over the course of the game. The music does a good job of being nondescript without being completely bland, finding a middle ground somewhere between pleasant and forgettable. We don’t say that as an insult: that is the music’s job here and, like most parts of this game, it does it well.

What is impressive is the fact that every line is voice acted by an excellent cast of names instantly recognisable to folks who watch anime or are fans of JRPGs. Normally games like this settle for providing voice work for a few lines per character, usually with a few barks in between to highlight specific moments, so having each line voice acted by actors from NieR: Automata, My Hero Academia, and JoJo’s Bizarre Adventure really helps bring the different characters to life and make them stand out against each other.

Love Esquire doesn’t seek to make the player feel like the big hero of the kingdom. It makes it clear right from the outset that that’s not the kind of story it is looking to tell. The other characters view the Squire as a lazy loser for the most part, hence his need to train his stats and forge those relationships so that he can get himself laid. Despite his intentionally generic design, the Squire does manage to have a fair bit of personality, especially as the player progresses through some of the side stories. 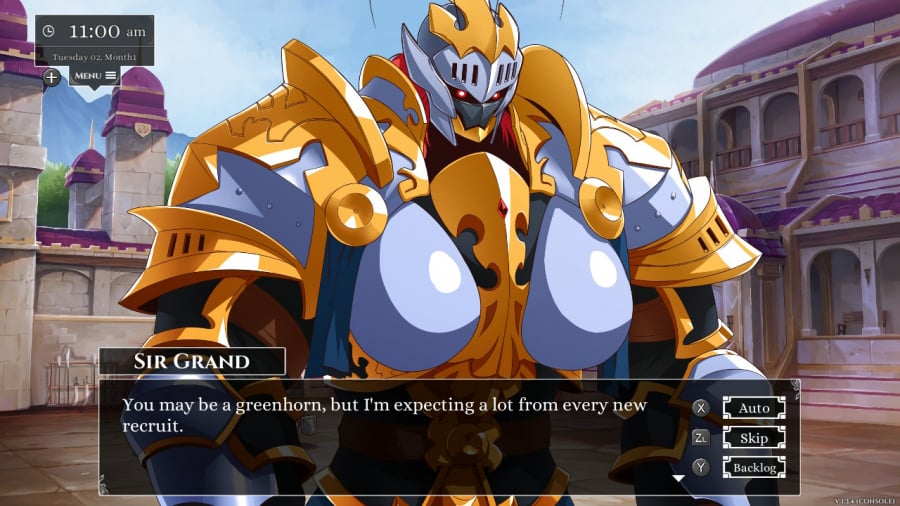 Aside from spending time upping stats and relationship scores with the five available ladies, players can spend their days out in the wilderness, assisting their knight in combat encounters against monsters. However, it is the knight who will do the actual fighting. All the Squire does is provide support by healing, looting, cheering, or acting as a human shield. It’s an interesting take on combat and does provide some strategic challenges, though all those challenges can be overcome by simply upping your stats.

Combat itself doesn’t give any actual stat boosts, but it does provide gold, which can be used to train stats, thus allowing you to progress further into the forest. Players shouldn’t need to grind much unless they choose to spend all their money at the shop for gifts for their favourite waifus. The game is fairly generous with loot even if players don’t spend much time actively looting from monsters.

The biggest drawback to Love Esquire is how safe it feels with its subject matter. The visual novel genre is packed full of customisable main characters, so the fact that all players will be able to customise in this game is the Squire’s name is a bit surprising and underwhelming. Likewise, the game is limited to five straight relationship choices, so fans looking for more diverse, LGBT+ friendly options will need to look elsewhere. It is clear that Love Esquire is intended to feel like a very safe and familiar option for fans, which is fine but, considering the effort that goes into other aspects of the game, a bit disappointing. 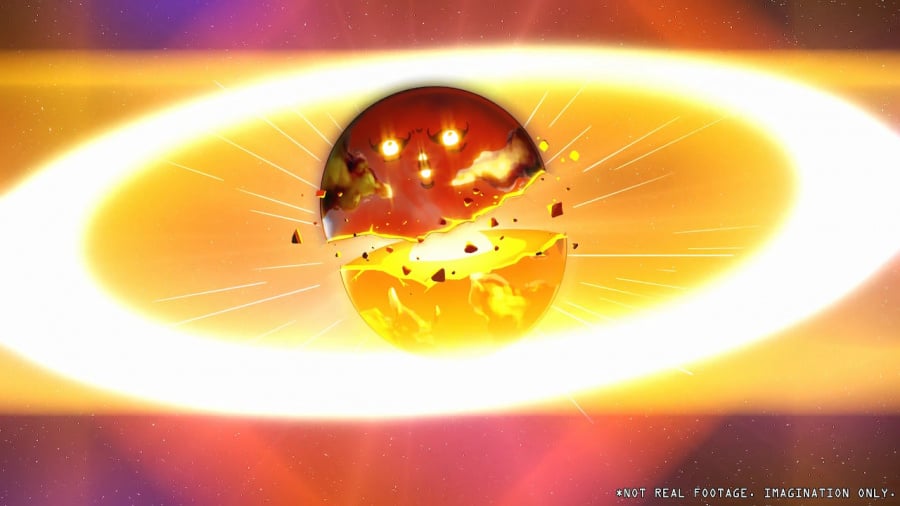 Love Esquire might star an absolute pervert of a main character, but the artwork never really goes beyond a PG-13 rating. There are some upskirt shots and a bit of implied nudity, but it never gets into full NSFW territory. Sure, players might not want to have to explain some of the screenshots to their parents if they walk in on them playing it, but it isn’t going to get anyone in real trouble. There are plenty of other games out there that can scratch that itch, both on PC and on the Switch, so we don’t mind them going a bit on the safe side here.

This is a game that serves as a solid introduction to dating sims for new players or a simple palette cleanser for those with more experience in the genre. Despite its high production values, it isn’t likely to convince those who have no interest in visual novels to give them a try. It isn’t here to push any boundaries and its lack of a diverse cast of characters is the most disappointing thing about it, but it is still a solid game telling a straightforward story with characters that are voiced by some of the very best in the business.

Love Esquire is a straightforward and fun visual novel/dating sim with simple but effective design and gameplay, surprisingly strong production values, and a fantastic voice cast. This isn’t a game trying to push the boundaries when it comes to inclusivity, but it is an enjoyable romp and a relatively ‘safe’ introduction to the genre for those unfamiliar with its tropes.

Random: You Can Play Super Mario 64 Via The Xbox's Web Browser