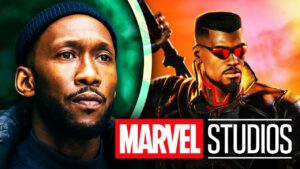 By now, most of the world knows that there will be a remake of Marvel Comics’ Blade which was popularized by Wesley Snipes when he played the role of the title character. In the latest version of the movie series, Mahershala Ali will take on the role made famous by Snipes.

In a recent interview with The Breakfast Club, Ali commented on receiving Snipes’ endorsement to replace him in the title role. A Twitter user wished Ali luck in taking over the role but also saying that he may have a hard time outdoing Snipes’ performance. Snipes, reacting to the Tweet states that Ali “will do great” in the role.

Best of luck to Mahershala Ali who’s gonna smash it I’m sure as blade but he’s gonna have a hard time outdoing Wesley Snipes pic.twitter.com/t0LskryhVE

Charlamagne Tha God questioned Ali about Snipes writing the response and how did he feel when he saw that Tweet.

Ali said, “Man, you know, humbled and so encouraged by that. Because he didn’t have to say that. Wasn’t nobody really asking him like that. So for him to come out and say that, somebody I look up to so much, I sincerely appreciated that. So thank you, brother.”

Snipes originally played the martial arts character Blade in 1998. The movie was followed by two sequels that took place in 2002 and 2004.

According to Comingsoon.net, the Blade trilogy has collectively made over $400 million at box offices globally. Blade was created by writer Marv Wolfman and artist Gene Colan. He was a supporting character in the comic book The Tomb of Dracula #10 in July 1973.

As previously reported, though he has been a Hollywood mainstay since his award-winning performance in Moonlight, Ali‘s latest film, Swan Song marks his first turn as the lead character in a movie.