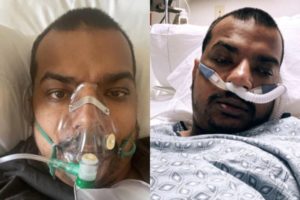 A California man who publicly mocked the COVID-19 vaccine on social media died last week from the deadly virus.

Stephen Harmon, 34, bragged and joked against getting the vaccine and even quoted Jay-Z lyrics saying, “I got 99 problems but a vax ain’t one.”

While documenting his hospitalization due to COVID, Harmon continued to denounce getting vaccinated, ABC7 reported.

“… I will not be getting vaccinated once I am discharged and released,” Harmon tweeted from his hospital bed.

It was three days before his passing when the active Hillsong Church member credited his faith in God for not believing in the vaccine.

“If you don’t have faith that God can heal me over your stupid ventilator then keep the Hell out of my ICU room, there’s no room in here for fear or lack of faith,” Harmon exclaimed.

It was the founder of the Hillsong Church, Brian Houston, who confirmed that Harmon had died from COVID complications. Houston took to Instagram to reveal when he received “the devastating news that our beloved friend, Stephen Harmon has passed away from Covid. Heartbreaking.”

“Stephen was just a young man in his early 30’s,” Houston added. “He was a graduate from Hillsong College and a vital part of our church in California. He was one of the most generous people I know and he had so much in front of him. He would always turn up to our grandkids’ soccer games and he will be missed by so many. RIP.”

Harmon had been treated for pneumonia and critically low oxygen levels in the hospital prior to his death, KCBS-TV reported.

Popular Final Fantasy 14 Encyclopedia, Poster, And Picture Books Are Being Republished, New Manga On The Way Too

Indie Watch: Smaller Games Worth Keeping An Eye On