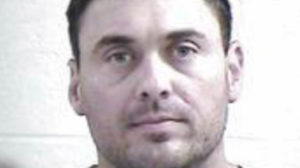 A white former police officer in Oxford, Miss., admitted to killing a former lover, a Black woman after she ended the relationship between the two and then threatened to tell his wife of the affair, has agreed to plead guilty to the crime.

According to The Daily Journal, former police officer, Matthew Kinne, 38, to avoid the death penalty, will admit to killing his girlfriend, with whom he was having an intimate affair with back in May 2019.

The former police officer Kinne, who was married at the time of the killing, was accused of shooting his Black girlfriend, Dominique Clayton, 32, while she was sleeping on May 19, 2019. The 40-year-old Kinne, who was originally charged with capital murder, is expected to accept a plea agreement on Friday. As part of the agreement, in exchange for pleading guilty to the killing, the state will take the death penalty off the table and recommend that the former police officer be sentenced to life in prison.

“I am not at liberty to disclose any details, but we have been working hard for some time to obtain a resolution,” said Kinne’s attorney, Anthony Farese of Ashland.

The Oxford Eagle has reported that the sentencing will take place this Friday at the Union County Courthouse in New Albany, Miss. Lafayette County Circuit Clerk Jeff Busby, assistant district attorney Mickey Mallette and attorney Carlos Moore, who represents the Clayton family each confirmed Kinney will take a plea deal of a life sentence without the possibility of parole.

On May 19, 2019, Clayton was found shot dead by one of her children at their residence at 1009 Suncrest Drive in the Brittany Woods subdivision. Lafayette County Coroner Rocky Kennedy had confirmed that Clayton died from a gunshot wound to her head.

A Lafayette County Grand Jury in August 2019 had indicted Kinne on a capital murder charge and he pleaded not guilty during an arraignment in September 2019.