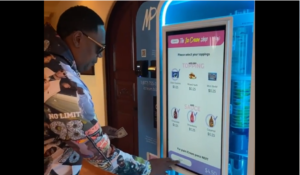 There is no limit to what Percy “Master P” Miller can do as a businessman.

The No Limit Soldier has given us clothes, films, a Louisiana-themed food product line, and now he’s at it again with yet another business venture—and this time he’s bringing ice cream machines to the masses.

In a recent Instagram post, Master P revealed his new endeavor, and it’s a pretty sweet—an on-demand ice cream machine called “The Ice Cream Shop” that serves up delightful flavors, toppings, and sauces in a cup.

“The ICE CREAM MAN taking over! Our new technology and Ice cream machine @romeomiller When you put God first, nothing is impossible. #TheIceCreamShop We going to take this company public soon.. The more we make, the more we give. It’s not how you start, it’s how you finish. Trust the process #TheFuture We creating economic empowerment, join the movement,” he wrote on Instagram.

Master P and his son, Romeo Miller, are seen in the video post snacking on cups of ice cream in front of the machine. Before grabbing his order, Master P selected an array of flavors, toppings, and sauces by pressing on the touchscreen menu.

“We’re going to take over the whole ice cream game,” he said while selecting. “This technology. Then, I’m going to take this company public real soon, so my people can eat off of this.”

“We got ice cream machines going to be in 7-Eleven, malls, schools, the celebrity houses,” he shared.

“This the future, pops,” Miller said.

Once his cup of ice cream was dispensed, Master P showed viewers that the spoon comes attached underneath the cup.

“The future,” he said after tasting his ice cream.

Last year, Master P introduced himself to the cereal industry with the release of “Hoody Hoos Cereal.” The cereal was named after a 1999 song released on No Limit Records by TRU, “Hoody Hooo.” Flavors for the cereal include Honey Drip, Tropical Fruit and Marshmallow, and Cinnamon Apple.

“Hoody Hoos Cereal is not only a delicious breakfast or snack but is making a difference,” Miller said, the founder and CEO of P. Miller Enterprises. “A percentage of every cereal box sold goes to providing inner-city kids in the community with education, resources, and activities to help build their future.”