Austin studio Matt Fajkus Architecture has designed a boathouse in the Texas city with perforated metal facades calibrated to balance light and shade throughout the year.

Located on the shore of a ravine in Austin, the Filtered Frame Dock is a two-storey boathouse positioned close to a nearby house built above water level.

The boathouse has a steel roof arranged in two triangular planes that protect the upper wooden deck from sunlight. The deck is wrapped by glass balustrades and features outdoor lounge chairs.

Filtered Frame Dock gets its name from the perforated stainless steel screens that flank its north and south sides.

The screens are designed so that the boathouse receives equal amounts of sunlight and shade during the year, with light and shadow perfectly balanced during the equinox.

“An instrument for light and ventilation, the structure is calibrated to provide a comfortable balance of sun, shade, shelter and breezes throughout the year,” said Matt Fajkus Architecture.

“As the seasons shift, the dock provides greater shade during the heat of the summer and welcomes more sun during the cooler winter months.”

The laser-cut perforations on each screen are also organised based on sightlines, so that visitors can enjoy views of the water from the deck. 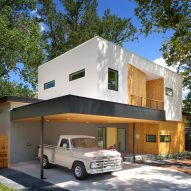 Other materials incorporated into the project are hardwood decking and natural stone, which are intended to echo the boathouse’s surroundings.

“Sensory experiences are both articulated by and inherent in the relationship between the dock and its natural context,” concluded the architecture firm.

Matt Fajkus Architecture has completed a handful of projects in its home city, including a house with a roofline that mimics a mullet and a mid-century home with an extension formed from wood, stucco and glass.

Boathouses are popular in Austin, since many locals like to enjoy the warm climate by spending time on the water. Architecture studio Andersson-Wise has created two on Lake Austin: one that allows users to dive from its upper level, and another assembled from salvaged materials.

The photography is by Leonid Furmansky, Charles Davis Smith and Matt Fajkus Architecture.

Random: Graphic Designer Recreates Marvel's 'What If...?' Series With Wario 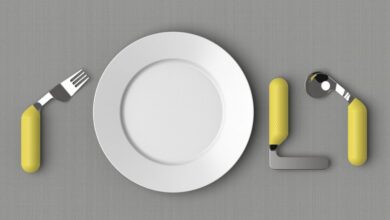 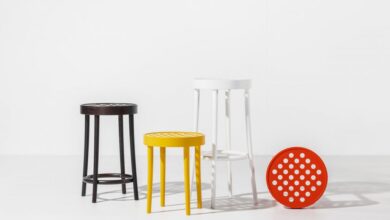