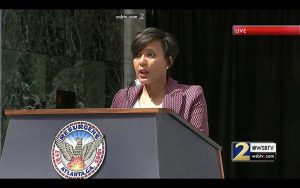 Atlanta Mayor Keisha Lance Bottoms announced a Utah laboratory will examine DNA evidence from a series of killings committed in Atlanta during in the 1970s and 80s.

Lance Bottoms said on Twitter that Atlanta investigators are traveling to Salt Lake City to provide a private lab with DNA evidence from missing and murder children cases  in Atlanta.

“It is my sincere hope that there will be concrete answers for the families,” Lance Bottoms added.

Between 1979 and 1981, 29 Black children and teens were killed in Atlanta. Wayne Williams has been long considered the main suspect, but he’s never been charged in connection with the deaths. In 1982, Williams was sentenced to two life sentences for the murder of two adults.

In 2019, Bottoms and former Atlanta Police Chief Erika Shields announced evidence from the “Atlanta Child Murders” would be reviewed to see if they could be tested further. Earlier this summer Lance Bottoms announced investigators extended the timeline to 1970-1985 to see if they can get information on any murders the police may have missed.

For Bottoms, the situation hits close to home. She grew up in Atlanta and saw stories of kids disappearing and being killed most of her childhood. Bottoms is not running for reelection, but said she hopes the next may will continue the investigation.

“I trust that whomever the next mayor is will keep this as a priority,” Bottoms said. “And it’s truly my hope that, with the analysis of this additional DNA, that we can have some additional answers.”

Lance Bottoms was a pivotal figure during the run up to the 2020 Presidential Election. The HBCU alum was one of the first politicians to support Joe Biden, stumping for him in the fall of 2019 and was a candidate to be Biden’s nominee for Vice President. She also sparred with Georgia Gov. Brian Kemp more than once during the height of the coronavirus pandemic.