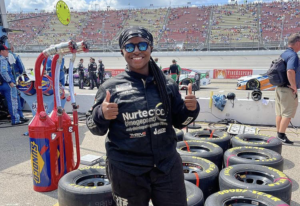 NASCAR will never be the same now that Brehanna Daniels is there. She is the first Black woman pit member—though she didn’t see it coming.

While attending Norfolk State University, Daniels, 27, played point guard for the women’s basketball team. She never once thought about NASCAR as a career, she told ABC News.

When asked about what her 17-year-old self would think about what she’s doing now, Daniels said she’d say, “Girl, you are crazy…”

“Especially, you know, a little Black girl like myself at that time. [I] definitely was like, I’m never getting into NASCAR. It wasn’t even a thought in my mind,” she continued.

NASCAR came into the picture when recruiters from the association’s Drive for Diversity program appeared on her campus in 2016.

Her skills on the basketball court were an easy match for NASCAR’s fast-paced pit crew.

“Brehanna was one of those who embraced it, came through the program, excelled,” Max Siegel, the manager of NASCAR’s Drive for Diversity program, said.

Following months of training, Daniels became the first Black woman, over-the-wall tire changer in the history of NASCAR in 2017. By the end of that year, she made history again after becoming a part of the first female duo in a NASCAR pit crew. ”

“I could not be more proud of what she’s accomplished both as an athlete, but she’s been amazing with her brand and social media and creating awareness and really getting people excited about the fact that if she can do it, there are other people that can do it,” Siegel said.

Siegel, NASCAR’s first highest-ranking Black executive, has worked to increase diversity in the association for the past 12 years. More than 60 of NASCAR’s women and minority drivers have come through the Drive for Diversity program, he said. The program has trained 75 gender and ethnically diverse candidates for NASCAR’s pit crews since 2009.

Still, while some celebrate her accomplishments, Daniels has encountered some negativity on the job. She’s learning to tune it out.

“People were like, ‘Oh, she sucks,’ ‘What does it matter that she’s Black?’ It’s like, why wouldn’t that matter? You don’t see that every day in NASCAR. Why wouldn’t that be talked about?,” she said.

Dr. Ketra Armstrong, a professor of race and inclusion in sports at the University of Michigan, said NASCAR hasn’t had much success with the African-American community at large because of its association with the Confederate flag.

“You see that symbol, you know that it evokes these feelings of hatred and racial denigration,” Armstrong said. “If you’re a Black consumer, it’s hard to enjoy the sports or the leisure or the activity when you’re surrounded by this ambiance or this effervescence that’s racially discriminating.”

NASCAR recently took a step toward reconciliation by returning an award, stolen nearly 60 years ago, to the family of Wendell Scott—the first Black man to win in a Cup Series.

“There’s always room for improvement,” Daniels said. “But like I said, I’m very proud of NASCAR and for all the progress it’s made…yeah, I love to see it.”