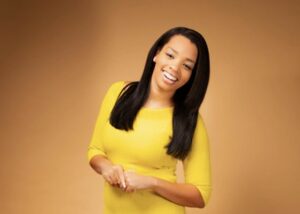 As the Founder and CEO of Peerro, a career pathway management system that  connects employers, schools, training organizations, governments and non-profits via one platform, Dr. Rachel Angel doesn’t work to make a living, she lives to work.

However growing up in an entrepreneurial household and witnessing her parents struggle to make ends meet, being self-employed left little to be desired. She quickly discovered that becoming a profitable entrepreneur extended far beyond the strength of having a solid idea.

Angel says, “We exist to provide access as well as actionable  instruction and education to individuals seeking a seat at the proverbial table. I’m  genuinely inspired by all the ways sharing just a small bit of information can help  change the course of a person’s life journey. The way I see it, when one of us wins, we  all win.”

Making the world a better place is a fundamental part of everyday business at Peerro.

Through passion and purpose, Dr. Angel was able to raise $1.3 million in capital from investors that believed in her vision. Her value proposition for providing a more efficient  system for employment candidates and related services was further validated when Franklin County, the largest district in the state of Ohio, began using Peerro’s software.

Founded in 2015, the company moniker combines the words peer and hero placing great emphasis on horizontal networking, which can lead to an individual influencing  someone’s life in a positive way. As a result of a fellow student changing the trajectory  of her life, Dr. Angel charged herself with the task of creating technology to duplicate  that experience for other young people and opportunity seekers of all ages to build  their careers.

Peerro benefits both students and employers by bridging the gap  between a skilled talent pool and realistic job requirements. “We pride ourselves on  aligning the interests of job seekers with the needs of employers.”

Peerro’s user-friendly  mobile app gives instant access to available jobs that match an individual’s criteria and  also identifies training in their area, which helps to streamline the hiring process.

“We  provide users with actionable steps to implement immediately at the click of a button  but we also help map out as well as guide them through their long-term plans. I had a 10-year plan as a teenager and it proved to be invaluable because I was able to  measure my progress and readjust as needed. I placed myself back into the role of an  18 year-old student and incorporated all of those beneficial elements into Peerro.”

The  app has proven to be a pivotal resource with multiple stories of young people gaining  access to employment through the technology.

For the Cleveland, OH native, leading with empathy is innate; the key aspect of her  business. As a minority female in the tech space, Dr. Angel understands obstacles of  racism and gender-based challenges that make it hard for someone who looks like her to navigate their way to the top.

“Being a black woman in this position, I don’t have a  choice but to be an activist. I accept the responsibility of being an agent of change and  a person who breaks down barriers and fearlessly speaks truth.”

Motivated by a  mission far greater than herself, Dr. Angel is a true innovator that believes in the power  of relationship, building a business with intention and putting people in position to win.  Dr. Angel has several high-level projects in the pipeline that will significantly impact Peerro users as well as underserved communities at large.

Dr. Angel originally pursued a career in Pharmacy seeking job stability and a six-figure  income, information she learned through a conversation with a peer. After that dialogue  exchange, the seed for Peerro was planted. On the fast-track to success, she received  a Pharm.D. degree from Hampton University at the age of 24. Her long term goal was to  use her salary to fund her own business ambitions but after being a practicing  pharmacist for 10 months, she decided to launch a nonprofit organization to empower  the youth by introducing them to new opportunities. Essentially it was the catalyst for what would become Peerro.