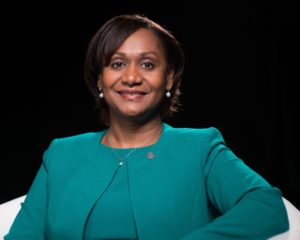 A Black woman named Vanessa Wyche is making history at the National Aeronautics and Space Administration as “the first Black woman to lead a NASA center,” according to The Texas Standard.

Wyche is officially working as the director of NASA’s Johnson Space Center in Houston, located in Texas.

The history-maker told The Texas Standard that “working her way through the ranks of NASA to reach” her current position has “given her a focus on safety.”

“The other thing that informs me is the leadership, and what it takes to lead a team,” she said in the news interview. “And part of that may be understanding that diversity of thought and of personnel is very important for us to bring everything to bear.”

“I’m humbled and honored to be chosen to lead the more than 10,000 employees at Johnson Space Center, who work each day to enhance scientific and technological knowledge via space exploration to benefit all of humankind,” Wyche said in a press release.

“As the home to America’s astronaut corps, International Space Station mission operations, the Orion and Gateway programs, and a host of future space developments, Johnson is a world leader in human space exploration and is playing a key role in the next giant leaps in American excellence in space. I look forward to working with everyone as we push forward to the Moon and inspire a new generation of explorers to reach for the stars.”

NASA’s Johnson Space Center’s new director served as deputy director at Johnson, “since 2018,” according to information provided in Wyche’s official bio. Other NASA leadership positions that she held include working as “director of the Exploration Integration and Science Directorate, flight manager of several missions of the retired Space Shuttle Program and executive officer in the Office of the NASA Administrator,”  per NASA.

Yu-Gi-Oh! Master Duel Might Finally Be What Fans Are Looking For

How to Read a Credit Report to Find the Red Flags