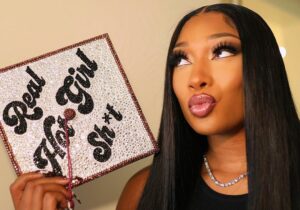 After balancing part-time college courses with the busiest period of her career, rapper Megan Thee Stallion is set to graduate from Texas Southern University in December.

The Houston native shared the news with fans on Instagram yesterday along with a selfie in her graduation outfit. After taking a brief hiatus, Megan returned to Texas Southern in 2019 to complete a degree in health administration. Her re-enrollment came months after the release of Tina Snow, the mixtape that kicked off her meteoric rise.

Her educational pursuit is inspired by her mother, Holly Thomas, and her grandmother, who both passed away in March 2019. According to Pitchfork, when Thomas—a former rapper herself—discovered her daughter’s talent, she made it a requirement that Megan could pursue a music career only when she turned 21 and promised not to abandon her education to pursue a rap career.

A year after resuming her studies, Megan explained to People that the women in her family continued to serve as her motivation, even in death.

The bulk of Megan’s success has happened since she went back to school. Over the last two years, she’s amassed 11 platinum singles, including her viral hit “Savage,” which, boosted by a Beyoncé-assisted remix, has sold over 4 million copies. The song also earned Megan two Grammys in 2020—for Best Rap Song and Best Rap Performance—the same year she took home the Grammy for Best New Artist.

During this period, she has expanded beyond the music world, becoming an ambassador for Revlon and Mielle Organics and launching successful marketing campaigns with CashApp, Fashion Nova, Nike, and most recently, Popeye’s Chicken.

While she won’t be pursuing a career in health upon graduation, Megan plans to open an assisted living facility in her hometown. She’s previously said that she plans on hiring as many students from her soon-to-be alma mater as possible.