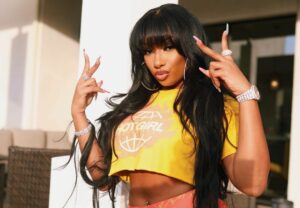 Following their million dollar stock giveaway earlier this year, Megan Thee Stallion has launched another partnership with CashApp, this time benefitting a variety of charities.

According to the Houston Chronicle, the rapper created a capsule as part of the Cash by CashApp clothing line. Megan’s “Hot Girl Enterprise” collection includes a $20 t-shirt, and shorts and a reversible bucket hat, both priced at $30.

In a post revealing the items to her Instagram fans, Megan, born Megan Pete, announced that all proceeds from the collection would benefit “charitable projects focused on education, housing, health & wellness in Houston & across the globe.”

The Hot Girl Enterprise shirt sold out in less than a week.

This is not the first altruistic gesture the Grammy-nominated artist has done for her city this week. On Tuesday, she announced that she would be cancelling a scheduled performance in her hometown in the wake of the Astroworld tragedy.

“Out of respect for the lives lost in Houston earlier this month, I have decided to cancel my show at 713 Music Hall on Dec. 3,” she said in a statement. “Houston is still healing, and it’s important that our community be given the appropriate time to grieve. My heart goes out to all the families that are suffering during this difficult time.”

Variety reports the cancelled appearance was set to christen the new performance venue and also serve as a graduation party of sorts for the soon-to-be Texas Southern University grad. Two days prior to cancelling her Houston performance, Megan surprised fans in Los Angeles when she joined Korean supergroup BTS on stage for a rendition of their hit single “Butter.”

This CashApp Partnership marks no less than three Fall 2021 brand partnership announcements for the rapper.

She previously partnered with Nike to launch a series of workout videos in the Nike Training App. And in October, she announced a deal with Popeyes that saw her not only add her own “Hottie Sauce” to the fast food restaurant’s menu, but also become a franchise owner.

RG3 Reveals He Was Sexually Harassed While Playing For Washington