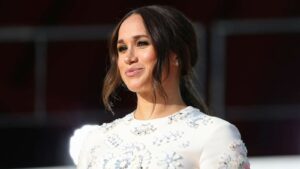 Markle, who wrote an open letter to Senate leadership last month supporting paid family leave as an “engaged citizen and a parent.” In the letter, Markle discussed the birth of her own daughter, Lilibet Diana Mountbatten-Windsor.

“Like fewer parents, we weren’t confronted with the harsh reality of either spending those first few critical months with our baby or going back to work. We knew we could take her home, and in that vital (and sacred) stage, devote any and everything to our kids and to our family,” the dutchess wrote.

According to The Hill, Markle was given the senator’s numbers by Sen. Kristen Gillibrand (D-N.Y).

“I talked to each of the women senators and let them know that she’s going to reach out, because she only completed two of the calls,” Gillibrand said, according to Politico. “She’s going to call some others, so I let them know in advance.”

“Much to my surprise, she called me on my private line and she introduced herself as the Duchess of Sussex, which is kind of ironic,” Collins told Politico’s Senate reporter Marianne LeVine. “I was happy to talk with her. But I’m more interested in what the people of Maine are telling me about it.”

Both the paid family leave and the immigration law changes have drawn resistance from Democratic Senator Joe Manchin (D-W. Va.), whose support remains crucial in the 50-50 Senate. The overall bill also faces united opposition from Republicans.

Elden Ring Might Have Performance And Graphics Mode On New-Gen Consoles, According To GameStop Listing