Arts company Meow Wolf has collaborated with 150 artists to create a series of immersive installations made from mostly salvaged material for its Shears Adkins Rockmore Architects-designed venue in Denver.

Known for its psychedelic design gallery in New Mexico, Meow Wolf has expanded its programming by opening the Convergence Station venue in a narrow gap between three viaducts near downtown Denver.

The Denver space aims to expand on Meow Wolf’s mission to enliven art communities and make art more accessible and appealing to people.

“We have a mission to make art that is as accessible to a billionaire as a minimum wage worker and create experiences that are accessible to them—not only financially but spiritually accessible,” said senior creative director Chadney Everett.

Meow Wolf, which is a certified B-Corp, commissioned more than 150 artists to complete the diverse array of permanent and temporary installations within the venue’s gallery spaces.

The installations will be continually updated to make the space a “living space for the arts community in Denver”, explained Everett.

The structure, built specifically for the arts organisation, is referred to informally by the team as the “sleepy pizza” because of its shape, dictated by the building’s site, which is crisscrossed by highway overpasses.

Colorado studio Shears Adkins Rockmore Architects designed the envelope of the building and worked closely with the architectural team at Meow Wolf.

It has white fibre-cement panels on the outside and is illuminated by strips of light along the facade.

“As Meow Wolf rises above its surrounding context its facade shines in the bright Denver sun and reflects an ever-changing array of colors at night, transforming a transportation corridor into a place where people and art converge.”

The venue has a lobby, events space and four primary gallery spaces that take advantage of the five-storey structure with wall-to-wall decoration and design. A series of smaller galleries line the space as well.

The first major gallery, named Ice Cities of Eemia, contains an icy extraterrestrial landscape filled with emulations of high-tech gadgetry. In the centre of this space is a miniature stained-glass cathedral.

Another gallery contains C Street – a bustling, colourful steam-punk world that utilises a salvaged utility truck and bus as centrepieces. A walkway resembling a train overpass allows viewers to view the exhibit from above.

Numina – a “6th dimension” space that uses representations of organic material to create an alien world, and Ossuary – a catacomb-like space with sculptures made from books, occupy the other primary spaces.

Smaller galleries contain other installations including Gremlin Symphony with walls made from instruments and road signs, and a plaster cave-like room with a ceiling material that resembles a disco ball. 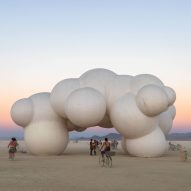 Everett said that providing different viewpoints for the exhibits was a critical aspect of designing the experience.

He also noted that the team tried to use as “broad of a palette as possibly” when choosing materials for the space, something added by the fact that much of the exhibits were made from salvaged material.

Meow Wolf began in 2008 and opened its first permanent installation in New Mexico. The organisation has expanded to Los Vegas as well. Other organisations that showcase immersive design include the yearly Burning Man festival in Nevada.

The photography is by Kate Russel, unless stated.