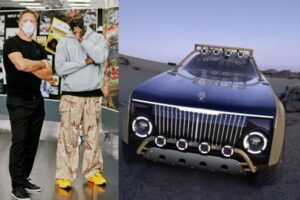 In the wake of the recent passing of Virgil Abloh, Mercedes-Benz took to Art Basel in Miami to unveil a custom electric Maybach designed by the late artist.

The new “Project MAYBACH” was broadcast one day after Virgil Abloh’s final Louis Vuitton show in Miami on Tuesday. The custom car is a collaboration between Abloh’s Off-White and the luxury car company.

The car is described as “a collaborative electric show car designed to inspire the next generation, and forever question the status quo,” which helps to redefine modern luxury vehicles. Created by Abloh, along with Gorden Wagener, Mercedes-Benz’s chief design officer and the co-creator of the G-Class.

Designer Heron Preston shared a few pictures from the exhibit on Instagram that paid homage to the late designer.

With the car being unveiled after Abloh’s passing on Sunday, Mercedes-Benz released a statement praising the late designer and explaining the inspiration behind their collaboration.

“The power of Abloh’s work is not only from the product design, but also the exploratory conversations that his work ignited,” the company said. “Whilst the Project MAYBACH show car was inspired by how one could explore nature within a uniquely luxury context with Maybach, the Mercedes-Benz teams thank Virgil Abloh for the inspiration to explore every day the power of cross-industry dialogue to imagine a better, more inclusive future.”

They also posted a message on Instagram while sharing a photo of Abloh.

“The world has lost a genius. But his inspiration and legacy will live on. In honor of Virgil Abloh — Project Maybach,” Mercedes captioned their Instagram post.

AHEAD awards winner creates hotel that draws on local environment