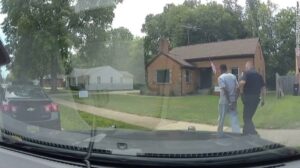 Earlier this week, BLACK ENTERPRISE reported that a Black real estate agent, Eric D. Brown, and his client, Roy Thorne, as well as his 15-year-old son, were handcuffed and arrested by Michigan police officers during the showing of a home.

According to the Michigan police department, the police officers were responding to a report of a break-in. Police explained that the same home was recently broken into. The 911 caller said that the person who had been arrested had also returned. Therefore, the police believed they were following proper protocol.

According to CBS News, officials with the Wyoming Public Safety Department have stated that the police officers “responded appropriately” to the incident.

“After a thorough internal review of the actions of each of our public safety officers who responded to this incident, we have concluded race played no role in our officers’ treatment of the individuals who were briefly detained, and our officers responded appropriately,” the statement read. “While it is unfortunate that innocent individuals were placed in handcuffs, our officers responded reasonably and according to department policy based on the information available to them at the time.”

The Wyoming Police Department stated that a man was previously arrested on July 24 for unlawful entry into the home and that the 911 caller told the police officers that the same man had returned on August 1.

The department also said those police officers had “immediately” taken the handcuffs off the men when they realized that they were just showing the house and a sergeant apologized to the men for the misunderstanding.

“They keep their guns drawn on us until all of us were in cuffs,” Thorne shared with News 8 as he recalled the experience. “So, that was a little traumatizing, I guess because under the current climate of things, you just don’t know what’s going to happen.”

Pride Flags At Virginia Tech's Wesley Center Have Been Stolen

Navy Master Chief And Daughter Served On Same Ship Together