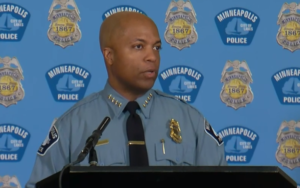 Minneapolis Police Chief Medaria Arradondo, who will be remembered for his handling of George Floyd‘s death, has announced he will retire early next year.

Arradondo, the city’s first Black police chief, was appointed in 2017 and was chief in 2020 when officer Derek Chauvin held his knee against George Floyd‘s neck for almost nine minutes reigniting the Black Lives Matter movement.

“After much personal reflection and thoughtful discussions with my family and Mayor Frey, I have made the decision that I will not be accepting a new term as chief of the Minneapolis Police Department,” Arradondo said according to CNN.

The police chief called Floyd’s death a murder and fired the four officers involved saying they all bore responsibility. Arradondo also testified at Chauvin’s trial saying the officer kneeling on Floyd was a violation of the department’s policies around de-escalation. Arradondo added his decision was not due to Floyd’s death and its aftermath, but feeling the time is right to step down.

After his announcement, many in the city praised Arradondo for his work adding they will be sad to see him go.

“He has done his service. He took us through the toughest of times and was an anchor in the storm for the psyche of the city,” said former Minneapolis City Council Member Don Samuels told CBS Minneapolis.

Samuels added that it is the city’s loss that the first Black police chief is quitting when many hoped he would lead the transformation of the department.

Some, including local activist AJ Flowers, the co-chair of the Young People’s Task Force believe this isn’t the right time for the police chief to retire.

“To retire right after all this fight that we went through after George Floyd, vote yes, vote no, and to have to re-establish that trust with another police chief,” Flowers said.