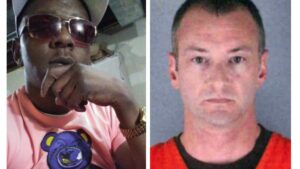 Minneapolis police officer Brian Cummings faces charges after an innocent bystander was killed in a car crash in July. Leneal Frazier, who happens to be the uncle of the teen who recorded George Floyd’s murder, died in the fatal car crash. He was 40 years old.

Cummings has been charged with second-degree manslaughter and vehicular homicide, according to court records. Prosecutors say the officer was driving 78 miles per hour to chase down a stolen vehicle. The officer passed a red light and struck Frazier’s car.

“Police are supposed to protect and serve citizens, and to act in a manner consistent with their sworn oath to do so,” said Mike Freeman, Hennepin County Attorney Mike Freeman, in a statement.  “Officer Cummings’ actions deviated from his oath and his negligence caused the death of Leneal Frazier.”

Freeman’s office filed charges against the officer for failure to serve the citizens of Minneapolis. The cop’s sirens and lights were on, Freeman noted in a statement. However, he was driving well beyond the residential speed limit of 25 mph. He chased a vehicle for over 20 blocks, but failed to watch out for bystanders.

The victim, Leneal Frazier, was a family member of Darnella Frazier, the teenager who captured the infamous video of George Floyd’s murder in Minneapolis. Last year, Officer Derek Chauvin kneeled on George Floyd’s neck for nine minutes and 29 seconds. Darnella’s video clip helped the family obtain justice. She won an honorary Pulitzer Prize “for courageously recording the murder of George Floyd, a video that spurred protests against police brutality around the world, highlighting the crucial role of citizens in journalists’ quest for truth and justice.”

The video changed Darnella’s life. She mentioned how the incident shed light on how “dangerous it is to be Black in America.” Now, the teenager mourns the loss of her uncle, Leneal Frazier.

“I honestly can’t believe I’m making this post right now,” Darnella posted on Facebook in July following the crash. “I woke up to the most horrible news. MINNEAPOLIS police Killed my uncle. MY uncle… Another black man lost his life in the hands of the police!”

She continues, “Minneapolis police has cost my whole family a big loss. It’s not fair how the police can just go around killing people…WHY ARE YOU DOING A HIGH SPEED CHASE ON A RESIDENTIAL RODE??? You took an innocent life trying to catch someone else.”

Lawyers Ben Crump and Jeff Storms will represent the Frazier family. Crump is the prominent civil rights attorney who represented George Floyd’s family. The Fraziers believe the charges against Brian Cummings are the first step towards justice.

“We commend the Hennepin County Attorney’s Office for having the courage to hold law enforcement accountable in this instance,” the family said in a statement. “No innocent civilian should ever lose their life because of unwarranted high-speed chases in residential neighborhoods.”