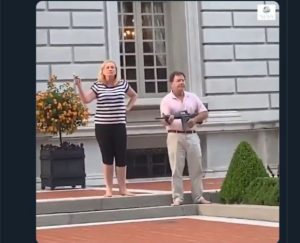 Missouri Gov. Mike Parson pardoned a St. Louis couple who received charges for waving guns at a group of Black Lives Matter protesters from the front of their mansion last year.

The governor announced Tuesday that he was releasing Mark and Patricia McCloskey of the misdemeanor convictions resulting from the June 28 incident.

In a video recording, Mark is seen holding an AR-15 style rifle while his wife, Patricia, waves a semiautomatic pistol toward the crowd of protesters as they passed by their home. The couple was filmed yelling “get out” to the group, though no physical confrontation ensued.

The protests were sparked by the killing of several Black people by police, including George Floyd in Minneapolis, Minn., and Breonna Taylor in Louisville, Kentucky. The McCloskeys, who are both lawyers in their 60s, claimed they were protecting their property while the protests went on.

The couple, who were guest speakers at the 2020 Republican National Convention, have been defended by many prominent conservative leaders, including Donald Trump.

A grand jury indicted them in October and Gov. Parson told reporters he’d consider pardoning them.

The couple was initially indicted on felony charges of the unlawful use of a weapon and evidence tampering, according to NPR. Special prosecutor Richard Callahan later amended the charges to give the jurors alternative convictions of misdemeanor harassment.

Mark, who said in May that he’s running for U.S. Senate, told reporters outside the courthouse following the hearing that he’d do it again.

“Any time the mob approaches me, I’ll do what I can to put them in imminent threat of physical injury because that’s what kept them from destroying my house and family,” he said.

In a news release following the McCloskey’s pleading guilty, Callahan said: “there was no evidence that any of [the protesters] had a weapon and no one I interviewed realized they had ventured onto a private enclave.”