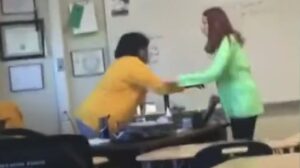 In a disturbing video that has gone viral, a white student is seen physically and verbally assaulting a Black teacher in Fort Worth, Texas, yelling obscenities and throwing items at the educator. Now, according to the district, police are investigating the matter.

According to the Castleberry Independent School District, the matter at Castleberry High School has been turned over to authorities because it involves a criminal act.

In the viral clip, which has been seen over 200,000 times, the girl, who her mother says is autistic, walked up to the teacher’s desk and hung up a desk phone as the teacher attempted to make a call.

“This teacher’s about to get f—– up if she doesn’t get the f— away from me,” the girl says into the receiver. “You want to talk to her? She’s Black, and she’s p—— me off right now.”

The irate student then throws the receiver in the teacher’s direction before storming out of the room.

Video shows a #student hitting #teacher and throwing a phone towards her way, this happened at Castleberry High School in #FortWorth pic.twitter.com/De0MVKTgUJ

As Steve Pool of the United Educators Association points out, because teachers are considered public servants, the young woman could face felony charges for her actions.

In an interview with a local news station in Fort Worth, the girl’s mother says her daughter assaulted a Black teacher last week because the school won’t assign the troubled girl to the proper class setting.

While praising the teacher for her general demeanor and professionalism in handling the situation, the girl’s mother, Brittany Evans, explained that her daughter is autistic, bipolar, and battles depression with anxious distress. She adds that she’s spoken to administrators at Castleberry High School no less than ten times to have her daughter placed in special education classes.

“I wish the school would label her correctly so we didn’t have to go through this,” Evans said.

In the meantime, Evans says her daughter has been suspended for three days.