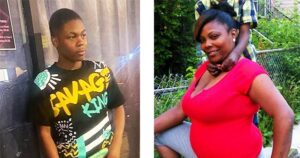 Delisa Tucker, a mother from Chicago, Illinois who was mourning the death of her teenage son, Kevin, has also been shot and killed in the very same spot where he was murdered just a few days prior.

Delisa, who was 31-years old, was reportedly visiting a memorial set up for her 14-year old son Kevin Tinker, who was a victim of gun violence when the incident happened just 3 days later.

Police said Delisa was shot in the chest and they found her lying on a sidewalk when they responded to a ShotSpotter alert on Wednesday. She was then taken to a nearby hospital where she was pronounced dead.

Her son, who was shot multiple times, was pronounced dead at the scene last Sunday. Tinker was reportedly outside a house that was targeted at that time but it was unknown if he was also targeted.

“It’s just sad that this whole family, basically, to be killed over time,” said Pastor Donovan Price, who said he consoled Tucker at a vigil for her son Sunday night, according to the Chicago Sun-Times. “I’m devastated.”

It has yet been confirmed if the mother and son shootings are connected. The neighborhood where they were killed has had at least 26 fatal shootings this year alone, according to the Chicago Sun-Times.

Kevin was described as a “quiet boy” and his family believes that he was not involved in any gang-related activity, according to the GoFundMe page that was set up to help their family with funeral expenses. It has so far raised more than $18,000.

20 Photos to Inspire You to Visit Leavenworth, Washington • The Blonde Abroad