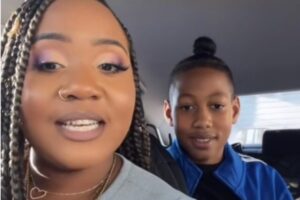 A mom recently went viral on TikTok after finally revealing all the trouble her 11-year-old son has been in due to his amazing tech skills.

TikTok user @VictoriaPrettyMuch took to TikTok last week to share a three-minute testimonial about her tech-savvy son who used his talents to do what any other 5th grader would do….get his class canceled.

Victoria recalled the school calling her in April 2021, telling her to come in because her child was in “major trouble.” She said four police officers, the district attorney’s office, superintendent, principal, and three IT technicians were all waiting for her upon arrival.

“What possibly could my 11-year-old child who is in 5th grade have done that has warranted all of this police activity?” Victoria thought to herself.

But she soon learned that her only child had been “controlling the internet at the school for the past three months,” she said. He had been shutting it on and off and preventing teachers from conducting virtual lessons.

“It was to the point that these kids had off school. Their teachers could not email each other, they could not instant message each other,” Victoria explains. “These kids were off school like every other week.”

All thanks to her son. But authorities went easy on the elementary school student and only punished him with some computer programming classes and community service instead of filing criminal charges.

After receiving so many comments of support and questions from curious TikTokers, Victoria posted a video update on Monday highlighting her “baby genius” Elijah and letting her followers know that he didn’t have to deal with federal charges because the district attorney did not want to ruin the 11-year-old’s record.

While the school wanted criminal charges filed, “it wasn’t really in their hands,” Victoria said.

She shared that part of his punishment included building a virtual soccer stadium since he plays the sport in real life; writing an apology letter to his mother; performing community service, which included cleaning the local church with his grandmother; and building a virtual basketball game, which Elijah completed in just two hours.

“I knew he was smart,” Victoria said in the video update. “Does he make the best choices all the time?” she jokingly said while Elijah shook his head no in the backseat of their car. “No, but we are working on that, and he is a very good child. Overall he’s a good boy.”