Over the past week, new details have been uncovered following a lawsuit filed by the State of California against Activision Blizzard. The suit centers around allegations that focus on workplace harassment, sexual misconduct, and various other labor law infringements. Now, a new report shows off more about what the reported “frat-boy culture” refers to, this time surrounding what is being dubbed the Bill Cosby suite.

Detailed in a new report from Kotaku, there is photographed documentation of the Cosby Suite that is named in the lawsuit. In the social media posts obtained by the site, it is further supported that more than just the named Alex Afrasiabi was involved in the alleged workplace behavior, though Afrasiabi remains front and center in the latest findings.

The suite wasn’t just a name. The developers seen in the obtained images show the men involved posing with pictures of Bill Cosby alongside the presence of alcohol. Alcohol during industry events is nothing new. However, this particular suite reportedly took things to the next level, not only drawing inspiration from Cosby, but one caption by a person involved proclaiming the suite to be a place of “gathering hot chixx for the Coz” when talking about potential hookups. 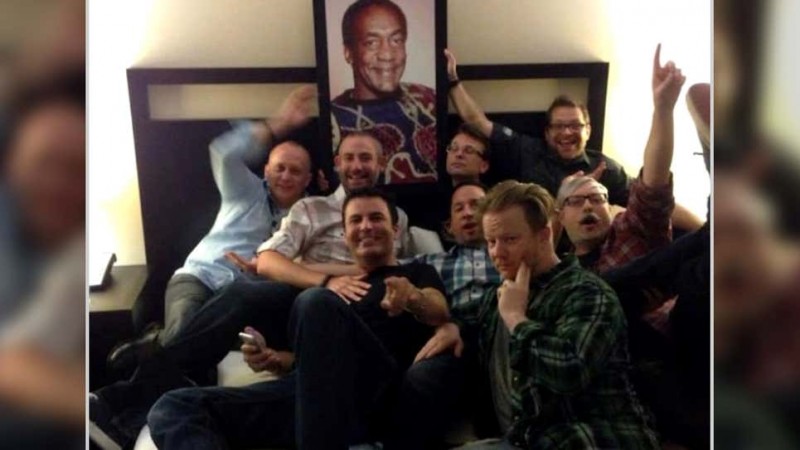 The site notes that another lead designer, Cory Stockton, was an active participant in a group chat with the images, as well as Greg Street, who is now at Riot Games. A member of HR was also reportedly a part of the images shown, which may shed some light on the lawsuit plaintiff’s claims attempts to go to HR for help being reportedly rebuffed.

According to social media posts made by those involved, the Cosby Suite was what Afrasiabi’s BlizzCon 2013’s hotel room was called in reference to the actor Bill Cosby, who was convicted of rape, before his conviction was overturned on a technicality earlier in 2021. Afrasiabi, alongside Blizzard president J. Allen Brack, was explicitly named in the lawsuit against Activision Blizzard. “During a company event (an annual convention called Blizz Con [sic]) Afrasiabi would hit on female employees, telling him [sic] he wanted to marry them, attempting to kiss them, and putting his arms around them,” reads the complaint. “This was in plain view of other male employees, including supervisors, who had to intervene and pull him off female employees. Afrasiabi was so known to engage in harassment of females that his suite was nicknamed the ‘Crosby Suite’ [sic] after alleged rapist Bill Crosby [sic].”

One source told the site that when the suite began its connotation, it was in relation to Cosby’s “ugly sweaters” and not the rape allegations against him in 2013, but that later it transformed into a focus on more sexualized context. Another source said that the ugly connection, aesthetically speaking, was also a jab at an “ugly boardroom back at Blizzard’s main office” with outdated designs; like Cosby’s sweater. Kotaku notes that this justification doesn’t quite line up with the images presented, where the walls were bare and without design.

Another image showed a woman sitting on a bed in the room whilst holding a portrait of Cosby with another woman holding someone else’s breast. Male colleagues cheered on the action, calling it “Coz Approved,” which sources say is indicative of Afrasiabi’s alleged “predatory behavior.”

Another source told the site that while Kosak was involved, he was one of the few that would step in when things were taken too far, including protecting colleagues when sexual harassment was apparent. To read the full report, and see more images obtained by the site, you can see Kotaku’s full report right here. You can also learn more about everything going on currently, including Bobby Kotick’s statement, the planned walkout, and more, here.

Unbound: Worlds Apart Is Out Now, Bringing Hand-Drawn Puzzle-Platforming To A Switch Near You