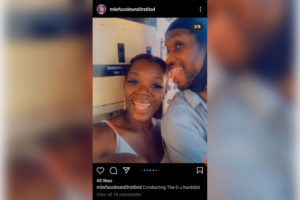 There are jobs where it’s OK to bring someone in to see you at work, but working as an MTA motorman in New York City isn’t one of them.

According to the New York Post, an employee working for the nation’s largest public transportation system, New York City‘s Metropolitan Transportation Authority (MTA), allowed his girlfriend to co-operate the train he was conducting during his time at work.

The young lady, identified as Dominique Belgrave, posted a video of the excursion she took with her now-fired boyfriend, Terrell Harris, while she helped him operate a subway train on the D line. The video was posted to her Instagram Live, which she has switched to a private profile since the incident took place.

The 28-year-old posted on her Instagram account showing her and Harris holding hands over the train’s controls as they powered the subway train through the 50th Street, 55th Street, and 62nd Street stations.

After posting the video clips, the footage of the couple documenting their activities had gone viral among many MTA workers over the weekend. The clips made their way to the eyes of a supervisor and the couple was reported to the New York Police Department (NYPD).

Interim Transit President Craig Cipriano has also stated that Harris will be disciplined.

“This video is beyond egregious showing a train operator who betrayed the trust of New Yorkers while creating a dangerous condition,” Cipriano said in a written statement. “I want to assure customers that the operator involved has been removed from service and will no longer be allowed to control a train.”

Belgrave posted to her Facebook account about the frustrations that have crossed her social media page since this incident happened.