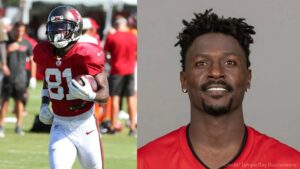 The Tampa Bay Times reported on Thursday that, according to Brown’s former personal chef, Steven Ruiz, the football player’s model girlfriend, Cydney Moreau, contacted Ruiz over the summer to get Brown a fake vaccination card for $500. He wanted the bogus card to serve as proof that he received the Johnson & Johnson shot.

Ruiz provided proof via text messages of the communication between him and Moreau. He was also offered $500 for the fake card.

Ruiz said he could not get a fake card for Brown, but a few weeks later, the wide receiver showed him vaccination cards he had for himself and Moreau that he claimed to have purchased.

The former personal chef admitted that he came forward with the accusation after Brown neglected to pay $10,000 owed to him. According to the Tampa Bay Times, Kevin Blatt, who is representing Ruiz, provided the Tampa Bay Buccaneers the names of two players who received fake vaccine cards.

The Buccaneers released a statement via Twitter responding to the fake vaccination claim.

“After an extensive educational process conducted throughout our organization this past offseason highlighting the benefits of the COVID-19 vaccines, we received completed vaccination cards from all Tampa Bay Buccaneers players and submitted the required information to the NFL through the established process in accordance with league policy,” the statement read. “All vaccination cards were reviewed by Buccaneers personnel and no irregularities were observed.”

On Thursday, Brown’s attorney, Sean Burstyn, spoke to ESPN‘s Jenna Laine and said that Brown is indeed vaccinated. “If Antonio’s doctors and the guidelines require a booster shot, then at that time, he’ll be happy to do it live on TV, and everyone can come watch.”