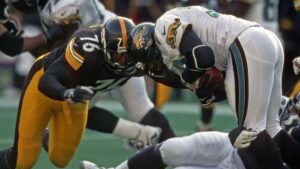 The NFL and lawyers representing thousands of former NFL players have reached an agreement to end race-based adjustments in dementia testing in the $1 billion settlement of concussion claims.

The revised testing plan came after a wave of public outrage after it was revealed the league was making adjustments to claims based on race. The practice, known as race-norming, was exposed after former NFL players Najeh Davenport and Kevin Henry filed a civil rights lawsuit last year.

According to ESPN, the adjustments prevented hundreds of Black players with dementia from receiving $500,000 or more in medical claims. As part of the agreement, retired Black NFL players will have their tests recorded and, in some cases, can be retested.

“We look forward to the court’s prompt approval of the agreement, which provides for a race-neutral evaluation process that will ensure diagnostic accuracy and fairness in the concussion settlement,” NFL lawyer Brad Karp said in a statement.

The agreement, which still needs to be approved by a judge, comes after months of negotiations between the NFL and Davenport and Henry lawyers.

“We believe that this is a huge win for Black retired players and look forward to discussing it more fully once permitted,” Cyril Smith, who represents the two Black former NFL players who sued the league, told The Hill.

One of the reasons the league may have been basing their tests on race is because the majority of current (70%) NFL players and living retired players (60%) are Black Americans. As a result, the elimination of race-based testing could cost the NFL significantly.

The NFL has paid out more than $800 million to retired NFL players for brain injuries, including early and advanced dementia, Parkinson’s disease, and ALS or Lou Gehrig’s disease. With new testing guidelines, more claims will be paid out.

Lawyers for retired Black NFL players aren’t done yet either. They believe that white players were paid out two to three times more under the race-based testing system than Black players since concussion payouts began in 2017.

Players are now trying to push the Civil Rights Division of the Justice Department to investigate, but it’s unclear at this time if an investigation will be conducted.