The Tokyo Olympics kicked off just last week and the opening ceremony featured amazing tracks from some of our favorite gaming franchises. With music from Monster Hunter, Kingdom Hearts, Final Fantasy, Soul Caliber, and more, the absence of Nintendo was glaring. Apparently, the company was initially slated to be a part of the Tokyo Olympics commencement ceremony, including a scrapped concept of Lady Gaga coming out of a Super Mario warp pipe.

In a new report from the Japanese site Bunshun (via Resetera), there is documentation of the opening ceremony’s “collapse,” detailing what was initially thought to be the show starter. According to the site, the original plan was to have a red motorcycle rush in to the theme of the main character from Katsuhiro Otomo’s manga Akira. A song written by Yasutaka Nakata was meant to play, and the overall vibe was meant to be “sunny” and “cheery.” But what actually ended up making the final production was a very different picture, which makes the leaked showcase plans all the more interesting.

The report states, “On July 19, four days before the performance, Keigo Oyamada, who was in charge of composition, was forced to resign because he had made statements in the past that boasted of ‘bullying for people with disabilities.’ Kentaro Kobayashi, who was in charge of the production as a show director, was also dismissed after discovering that he had been ridiculing the Holocaust in the past.” With those changes, many visions regarding the event were altered.

The documentation details several major ways that the opening ceremony changed just before the final curtain call. Nintendo’s participation, as of June 16, was meant to include the main theme of The Legend of Zelda, Super Mario Suite, Kirby Super Star Medley, and the opening of Pokemon. The article details that all of those plans were scrapped “just before the show,” though Nintendo did not comment when inquiries were made outside of “We are not in a position to answer.”

The proceedings were also meant to feature Lady Gaga and Naomi Watanabe coming out of a warp pipe donning Mario-related gear: 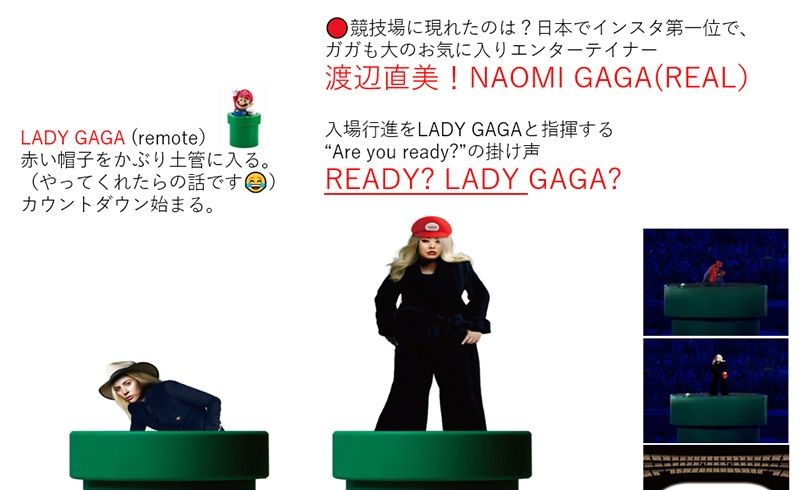 While the Olympics are in person this year following a year of lockdown due to COVID-19, it is reported that nearly 80% of Japanese people that were asked if they were for or against the Olympics taking place this year (in person) said that they were against it. Given the current situation of Japan in relation to COVID-19, that hesitency is understandable.

For those interested in which songs did make the Tokyo Olympics cut, check out our previous coverage here.