Czech studio No Architects has renovated and extended a 1920s villa in a Prague suburb, adding bespoke joinery and modern details that complement the original architecture.

The studio headed by artist Daniela Baráčková and architect Jakub Filip Novák oversaw the modernisation of the property in the Smíchov district on the left bank of the Vltava river.

The extensive remodelling and extension aimed to retain the character of the house, which was built in the 1920s in a romantic style that references the steep-pitched roofs and brick cladding of arts and crafts-style English villas.

No Architects removed all of the existing floors, ceilings and non-load-bearing walls of the semi-detached property and added a side extension to accommodate containing a ground-floor guest suite and a bedroom on the first floor.

The extension utilises the same palette of clay roof tiles, painted brick and a pumice stone plinth in order to produce a timeless aesthetic that is in keeping with the original architecture.

“Our addition refers to the original facade details and is hardly recognisable as separate to the original house. The connection between the new and old parts is not just via design, but it seems seamless even by structure and same ageing of material.”

The revamped interior has a contemporary layout, with an open living and dining area linked to the adjacent kitchen. A new doorway in the rear elevation provides direct access from the kitchen to the garden.

A custom-built unit next to the back door discreetly conceals a pantry and toilet, along with plenty of storage and space for the refrigerator. 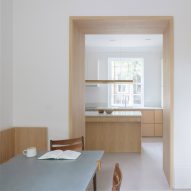 No Architects designed bespoke joinery added throughout the house to make optimal use of the available space and to create a sense of aesthetic consistency between the various rooms.

“The living space consists of many details and we like to frame them because it helps connect plenty of technology and infrastructure which surround us in any house,” said Novák.

“It’s also an economic decision,” he added, “because every square metre of living space in Prague is expensive so it is rational to use it sensibly. We see joinery as part of such thinking, uniting architecture, construction and technology.”

Some of the interventions were painted in pastel shades that add a distinctive character to the spaces. The upper floor and staircase feature green woodwork, while the ground-floor joinery is painted a shade of duck-egg blue.

The clients spent part of their lives working in Japan and the United Kingdom, so some of the colours and details reference these experiences.

The decorative panelling and exposed radiators on the first floor recall traditional British houses, while the minimal bench seating in the living room and the tiled porch evoke Japanese living.

A small door on the first-floor landing provides access to a previously unused space above the entrance that now contains a private play area accessible only by the children.

Throughout the project, No Architects adapted existing features to give them a new purpose or to enhance the character of the building while ensuring it meets the client’s requirements.

“We work with intuitive ‘memory of architecture’ and aesthetics which belongs to the original era but we don’t follow it directly,” Novák added, “we just use it to make a nice place that makes the most of the potential which is in the atmosphere of the house.”

No Architects’ founders met while studying at the Academy of Arts, Architecture and Design in Prague. The studio combines the disciplines of art and architecture to produce detailed-oriented solutions that reflect their clients’ requirements and personalities.

The photography is by Studio Flusser.