As the first wooden office building in the Swedish city, Nodi was designed by White Arkitekter to showcase the structural possibilities of wood.

The upside-down structure integrates a series of cantilevers, allowing the floor plates to incrementally increase in size from the bottom to the top of the five-storey block.

“It sure takes courage to carry out a project like Nodi,” said Joakim Hansson, the lead architect on the project.

“Thanks to the close, ambitious and open cooperation between all parties, we have been able to develop a pioneering project that is Gothenburg’s, and also one of Sweden’s, first wooden office buildings,” Hansson stated.

Nodi is shortlisted for Dezeen Awards 2021 in the business building category.

Its most distinctive element is its wooden structure, which is visible both inside and out.

This is a pillar-beam construction of glue-laminated timber, also known as glulam, which was manufactured by Swedish company Moelven using fir trees grown in central Sweden and Norway.

Due to the depth of this structure, the wood creates seating niches within the facade.

“We wanted to expose as much of the wooden frame as possible, to showcase the simple but expressive aesthetics of wood,” Hansson told Dezeen. 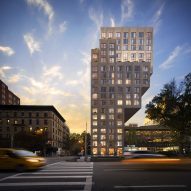 “The dimensions are often larger than a corresponding steel structure,” he continued. “Floors often become thicker, and pillars larger.”

“The lasting impression of the office building is the warm feeling that the wood adds.”

The layout of the offices is highly rational, with four corner units on each level, organised around a central core containing meeting rooms, kitchens, toilets, and the staircase and lifts.

This arrangement offers plenty of flexibility; a tenant could easily take two or more adjoining units and connect them.

An additional two units are located on the upper level, along with a roof terrace that is shared by all tenants.

White Arkitekter has become a pioneer of wooden architecture, having pledged to make all of its buildings carbon-neutral by 2030.

The studio – which has offices across Sweden as well as outposts in the UK, Denmark and Norway – also recently completed one of the world’s tallest timber towers and Scandinavia’s first zero-energy hotel.

“It is important that there is a market for this type of project and that tenants are convinced that it creates attractive workplaces,” added Hansson.

“The industry is conservative and tends to choose convenient paths,” he said, “so in order to be successful it is crucial that the entire team has a consensus and a belief in succeeding.”

The photography is by Åke Eson Lindman.