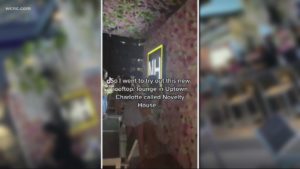 A new bar in Charlotte, NC, went viral for all the wrong reasons after a customer accused the business of using a dress code policy to discriminate against Black patrons.

Newly opened Novelty House in uptown Charlotte was put on blast on social Wednesday through a video accusing the establishment of discriminating against Black men. According to the video, the group went to the location and were told they can’t wear shorts. After the Black men changed and came back, there were still told no.

One Black female patron who entered the bar recorded a video showing the all-White customers who were allowed to enter despite wearing casual clothing.

“Super disappointed this is happening in 2021,” journalist Tasha McCaskiel said on Instagram. “I have countless people in my DMs sharing the same experience. @noveltyhouse @havanasmokeandreserve you will be held accountable until you serve based on equality and not your own discriminative discretion.”

“Countless white men were allowed in looking very casual and once my friend went to change, they still denied him. What is your reason,” she asked.

McCaskiel recalled going to the bar on Friday with her male friend who was wearing shorts. He was denied entry even after he changed into an outfit that other White patrons had on.

“I looked around and saw white guys wearing jeans and I said jeans are accepted and he paused then said yeah,” McCaskiel told WCNC.

However, even after her male friends changed into jeans, he was still denied entry. In her now-viral TikTok video, McCaskiel also notes the bar has only White servers and all of the customers were noticeably all White.

“The problem is when you use the dress code as an excuse to exclude certain people and you’re just making up rules,” McCaskiel said.

After sharing her experience, MCaskiel quickly learned that she wasn’t the only Black customer who had this experience at Novelty House.

The bar has since revised the dress code policy to clear up the “confusion” they said has been caused after only being open one week, Axios Charlotte reported.

“We’ve been open for less than a week and there’s definitely been some confusion about our dress code, so we have posted some guidelines on our website to help customers better understand our expectations,” said managing partner Ian Jones (who is Black).