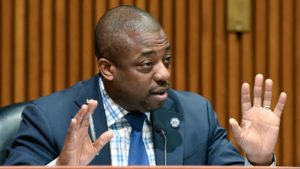 New York Governor Kathy Hochul has chosen Brian Benjamin to replace her as the state’s lieutenant governor, the second highest-ranking position in the state

Benjamin, who was born and raised in Harlem, was elected in 2017 to represent the neighborhood and the Upper West Side. Benjamin ran for New York City Comptroller, but was unsuccessful, finishing in fourth. The Brown and Harvard graduate worked for Morgan Stanley before jumping into politics full-time.

Hochul, who took over as the Gov. after Andrew Cuomo resigned, is expected to make a formal announcement later this week. Hochul’s choice is a sign of her effort to diversify the Democratic ticket ahead of the 2022 midterm elections and to appeal to NYC residents.

He’s also sponsored bills pushing banks to divest from private for-profit prisons and to create a rainy day fund the city can tap into for fiscal emergencies.

Benjamin’s selection by Hochul could help attract voters to her with his financial background. Hochul will have to run again for governor next year if she wants to keep her seat. New York City Public Advocate Jumaane Williams is exploring a run and many believe Attorney General Letitia James may run as well.

The race is expected to be tightly contested with many candidates like New York City’s Democratic mayoral primary earlier this year.

Keith L.T. Wright, a friend of Benjamin and the chairman of the Democratic party in Manhattan, praised Hochul’s appointment.

“He’s bright, he’s intelligent and I think he’ll be a great pick,” Wright told the New York Times. “I think he would be someone who would roll up his sleeves and get to work.”