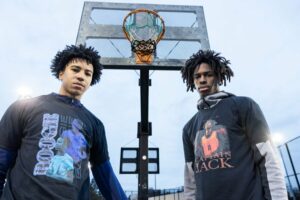 Ian Jackson of Cardinal Hayes High School for Boys and Johnuel “Boogie” Fland of Archbishop Stepinac High School are among the top ten sophomore basketball players across the country, reports the New York Post. They’ve both already received scholarship offers from some of the top college basketball programs in the country, including UCLA, UConn, Duke, and Syracuse.

The Bronx players were recently recruited by social media company Spreadshop, one of the first companies to seek out younger athletes as states began following the NCAA’s lead and shifting their NIL policies for high school students.

Over the next six months, Jackson and Fland will each receive a four-figure monthly salary to identify themselves as Spreadshop athletes in at least one social media post a week. The deal also allows them to create apparel that can be sold through the platform.

“It’s a big step for New York basketball, two kids from The Bronx doing something nobody else has done before,” Jackson told The Post. “People will look at us as role models.”

In July, the NCAA adopted an interim policy allowing student athletes across the country to accept opportunities to monetize their name, image and likeness, and even seek the support of professional organizations to identify those opportunities. Since then, only a handful of states have adopted or highlighted similar rules for high school students, including New York and California.

To date, only two other high school athletes – both basketball players – have made public announcements about their NIL deals.

Mikey Williams, a junior from North Carolina, was the first, inking a marketing and representation deal with Excel Sports just weeks after the NCAA decision. In October, Williams announced a multiyear deal with Puma which, according to ESPN, makes him the first American high school athlete to sign a footwear deal with a global brand.