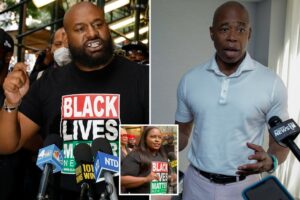 In the wake of Hawk Newsome’s statement that his new policies would trigger violence, New York City’s mayor-elect Eric Adams is asking Democrats to openly and publicly denounce the Black Live Matter activist.

Adams’ call to action came during a press conference in Brooklyn on Friday, in response to Newsome’s earlier statement made to the media about Adams’ proposal to reinstate the NYPD’s plainclothes unit, with a new focus on gang and gun violence.

Asked by members of the press why more Democrats haven’t reacted to Newsome’s statements, Adams responded, “I have no idea. I think that this is an excellent moment for the local and state and federal Democratic Party to state: We could have justice without violence.

“National, state and city elected should stand up and say, ‘we will never allow anyone to make those comments,’ that there will be blood in our streets, because you know where that blood ends up? In the streets of our community.”

NYC’s plainclothes unit was dismantled in 2020, as the ongoing BLM protests brought national attention to repeated accusations of racism within the unit.

Newsome, who co-founded Black Lives Matter of Greater New York, says that he feels Adams is avoiding the issue and using his statements to create “a political circus.”

“Instead of talking about the issues, he is seeking to discredit an organization that has served the community,” he explained. “This is smoke and mirrors to cover up for the fact that he doesn’t have an actual articulate plan.”

For his part, Adams insists that the new plainclothes unit will a far cry from the department’s previous use of un-uniformed officers.

In addition to having the new unit’s sole focus being on gun violence, Adams also promises to put all necessary safeguards in place to make sure “bad apples” don’t infiltrate the ranks.