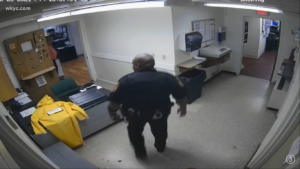 A Black police officer in Sheffield Lake, Ohio, has filed a racial discrimination complaint with the state’s civil rights commission after his chief left a note with “Ku Klux Klan” on his raincoat.

The incident was captured on video this summer. The officer, Keith Pool, announced the complaint against the Sheffield Lake Police force at a news conference, saying city officials did little to stem a tide of racist misconduct by the chief at the time, Anthony Campo.

Campo said the note was meant as a joke but resigned days after the incident went public. Pool, 57, became Sheffield’s first Black police officer last year and is currently employed by the city. During a video news conference Thursday, Pool said Campo has a history of racial incidents including calling Pool the N-word, and regularly posted racist fliers on a bulletin board targeting him and a Hispanic officer.

In the video recorded on June 25, 2020, Campo can be seen walking to the office copier, grabbing a sheet of paper, and placing it on Pool’s raincoat. Campo then walks back to the copier and watches Pool walk toward the coat. A few minutes later when Pool confronted Campo, the chief rolled up several papers and placed it in on his head to simulate a KKK hat. Pool’s lawyers obtained the video through a public records request, according to The New York Times.

“My exact words were, ‘Are you serious?’” Officer Pool said at the conference Thursday. “And I just looked at him. What else can you say to the chief of police, who had done something so heinous and so awful to the first Black officer ever? It’s not understandable.”

Sheffield Lake Mayor Dennis Bring told WKYC in June that shortly after the incident, he apologized to Pool and rejected Campo’s explanation of the incident.

“I said, ‘I don’t want to even hear about it,’” Bring said about the conversation with Campo. “I said, ‘You’ve already admitted to it.’ And I said, ‘You’ve got 10 minutes to get out of this office.’ I said: ‘I want your keys, badge and that’s it. Get out.’”

Pool, who has worked in law enforcement for more than three decades, said the incident struck a nerve because he’d recently learned a member of the KKK killed his great-uncle.