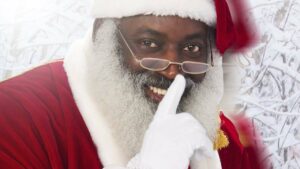 After introducing “skin-tone Santa prints” to its 2020 collection of holiday-themed pajamas, Old Navy will now introduce a cast of inclusive Santas to stores across the country this weekend.

The company’s flagship stores at Herald Square in New York City, Market Street in San Francisco, and State Street in Chicago will all be visited by diverse Santas in socially-distant photo moments with families on Saturday, Dec. 4.

The people chosen to represent the mythical Christmas figure all participated in a online Santa BOOTCamp, which the retailer held Nov. 19. The immersive 30-minute virtual course was presented in partnership with Timothy Connaghan, who owns one of the largest Santa booking agencies in the country. In 2003, Connaghan, who is the official Santa of the Toys For Tots campaign, launched a School4Santas, which has seen nearly 5,000 graduates in its 18-year history.

“It’s not the red suit or white hair and beard that create holiday magic, it’s what you have in your heart,” Connaghan said in an Old Navy press release. “A good Santa should spread joy and exude the holiday spirit, regardless of their appearance.”

According to Old Navy, while almost half of children in the U.S. under the age of 15 identify as non-white, less than 5% of the country’s professional Santas identify as people of color.

In addition to the push for more inclusive Santas, Old Navy’s ALL-idays campaign aims to celebrate the diversity of the company’s consumer base by incorporating a variety of year-end traditions and people of all ethnicities into their holiday ads, including Keke Palmer, the celebrity face of this year’s holiday advertising.

Through Dec. 21, Old Navy will welcome a diverse group of influencers to take over its social media channels for a week, during which they will share their family’s take on winter festivities.