The arrival of Olivia and John’s baby boy comes a little over two months after the Big Mouth actor confirmed he was going to be a dad.

“In the spring, I went to Los Angeles, and met and started to date a wonderful woman named Olivia—Olivia Munn,” John told pal Seth Meyers on Late Night in September. “I’m going to be a dad. We’re both really, really happy.”

In mid-November, Olivia opened up about the chatter surrounding her pregnancy.

“There’s this vulnerability that I feel that makes me want to…just turn everything off,” she told The Los Angeles Times. “I’d rather close the door to that and just take care of myself and my baby.”

She added, “My brain hasn’t been able to settle because it’s just a constant feeling of you’re doing it wrong. People tell me the baby will come and then you’ll figure it out. But that doesn’t stop the anxiety I feel right now.”

In that same interview, the Predator actress shared rare insight into her and John’s relationship. The two first sparked romance rumors in May, shortly after John split from his wife of six years Anna Marie Tendler. 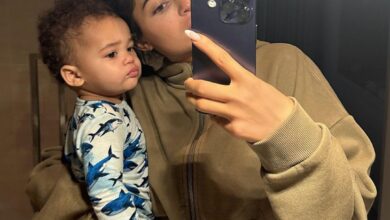