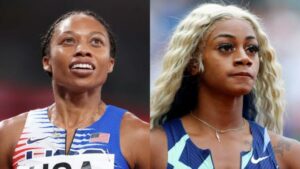 Allyson Felix is sending her encouragement and support to Sha’Carri Richardson and wants others to do the same.

During the show, Felix was asked about Richardson and made sure to offer some love and support.

Guest host, Stephen A. Smith, an ESPN commentator, asked Felix to send the 21-year-old sprinter a message in light of “what she endured” both before and after what would have been her first Olympics.

“I know that she’s obviously been through so much and I hope that she’s just supported. I hope people rally around her,” Felix responded. “Obviously she has a great personality and she’s brought a lot of attention to the sport and I think she’ll be in the sport for a very long time.”

She continued, “I think just more than anything, for all athletes, there’s so much that goes into it. Just give her the support that she needs.”

Richardson qualified for the 2020 Summer Olympics with a 100-meter time of 10.86 seconds at the 2020 United States Olympic Trials.

After being suspended from Team USA over a positive marijuana test earlier this summer, Richardson competed against all three women’s 100m Tokyo Olympic medalists — Elaine Thompson-Herah, Shelly-Ann Fraser-Pryce, and Shericka Jackson — at the 2021 Prefontaine Classic in Oregon this past Saturday.

However, there was much criticism over her performance. She came in 9th with a time of 11.14, but Richardson held her head high afterward.

“Coming out today, it was a great return back to the sport. I wanted to be able to come and perform, having a month off, dealing with all that I was dealing with,” she told reporters. “I’m not upset at myself at all, this is one race. I’m not done,” Richardson said.