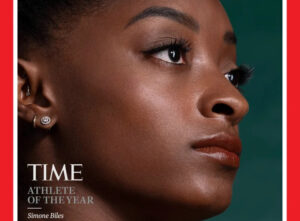 Adding another accolade to her already full mantel, Olympic gymnast Simone Biles has just been named Time Magazine 2021 Athlete of the Year.

Biles took to her Twitter account to announce to her 1.7 million followers that she was honored with the prestigious award.

Perhaps, arguably, the greatest Olympic gymnast of all time, she gained a new legion of supporters when she opted out from competing during the Tokyo Olympics due to mental health issues. She also drew criticism and was even labeled a quitter in certain circles because of that decision.

At that time, she said her mind and body weren’t in sync, and she felt it put her at serious risk. She pulled back from the next four events, but she did make a return for a scheduled fifth one, and although expected to make a clean sweep of gold in those events, she brought home a team silver medal and achieved a bronze medal on the balance beam.

With fellow Olympian tennis phenom Naomi Osaka withdrawing from the French Open in May due to anxiety, she placed mental health in the spotlight. This preceded Biles’s bout with mental health, but it also legitimized her struggles.

“I do believe everything happens for a reason, and there was a purpose,” Biles expressed to TIME recently in an interview. “Not only did I get to use my voice, but it was validated as well.”

The 24-year-old also had something to say to those who called her a quitter.

“If I were going to quit, I had other opportunities to quit,” she responds. “There is so much I’ve gone through in this sport, and I should have quit over all that—not at the Olympics. It makes no sense.”