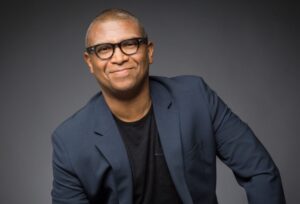 Oscar-nominated film producer and director Reginald Hudlin just received the Freedom Summer of ’64 Award from Miami University for his contributions in bringing the Black image to the screen.

“These are superheroes who risked their lives,” stated Hudlin of those who trained in Oxford in 1964. “I feel very humbled in that in any way what I do can be compared to what those heroes did. I am inspired and feel a sense of mission.”

Hudlin’s recognition comes as the university starts its inaugural Freedom Film Festival today through Nov. 11 to celebrate the evolutions of Black representation in film.

During the event, Miami University alumnus and Broadway Distinguished Scholar-in-Residence Wil Haygood will be featured, along with the release of his new book, Colorization: One Hundred Years of Black Films in a White World (Random House, October 2021).

Reflecting on Hudlin’s work, Haygood said, “Hollywood is a better place because of his monumental contributions when it comes to equality and representation.”

Miami University President Gregory Crawford added, “We are so honored to present Reginald Hudlin with the Freedom Summer of ’64 Award. His work and passion to promote diversity in the film industry and bring Black American stories to the forefront have advanced justice and equality on a national and global scale.”

Founder and president of Hudlin Entertainment, Hudlin is known as a “renaissance man” for his work in film, television, and comic books. He is cited for his unique approaches as a writer, producer, director, and executive. He wrote and directed his first film, House Party, in 1990. He produced Quentin Tarantino’s 2012 film, Django Unchained, which earned an Academy Award nomination for best picture.

Most recently, Hudlin has written Martian Manhunter comics for DC Entertainment and is slated to produce ValZod—a story of a Black Kryptonian who finds refuge on Earth 2—alongside Michael B. Jordan’s Outlier Society. He also is known for his work on other films like Boomerang and Bebe’s Kids.

Last year,  he became the first-ever Black producer for the Emmy Awards.  He also served as president of Black Entertainment Television (BET). He currently is a partner of Milestone Media, which develops a line of Black-oriented comics in partnership with DC Comics.