Mario Golf: Super Rush has been one of the more notable Switch releases so far this year, and it got off to a fast start in terms of its sales. We gave it a rather qualified recommendation in our Mario Golf: Super Rush review; it’s a solid entry in the series and offers good entertainment, but we argued that it resembles a ‘mid-tier’ release compared to some other Nintendo titles.

Of course now it’s had a major version 2.0 update, and it actually addresses a few of our complaints. So we decided to take a look at the new content and share our thoughts on each addition, and how much the new content improves the broader game.

Here’s our rundown and thoughts on all the new features having spent a day with update 2.0…

Nintendo has stated that it’s made some improvements to motion controls, which is tough to quantify; they were pretty good anyway.

One thing you can do if you really focus on your technique is impact the elevation of your shot, which isn’t something we were aware of during the review process; it attempts to judge your swing in terms of whether you swing to get under or above the ball, so it’s a nice extra bit of detail if you’re taking your motion game seriously.

The most important improvement, though, is that the ‘Golf Guide’ area now has a whole section dedicated to motion controls, filling a notable need considering how little the game helped in this respect. You can work through shot types and read tips / watch videos so you can understand all of your options.

We still feel that motion controls are harder to use and less precise than the button equivalents, but if you’re using them for fun and enjoy the activity of playing that way then, it seems, they’re better than ever before.

Toadette arrives in the Clubhouse

Toadette joins the expansive Mario Golf character roster and takes the total up to 18 playable characters (including your Mii, of course).

As you’d guess from her diminutive stature, she has some similarities to her contemporary, Toad. She’s an ideal character for accurate, short play, which makes her perfect for the game’s brand new course…. 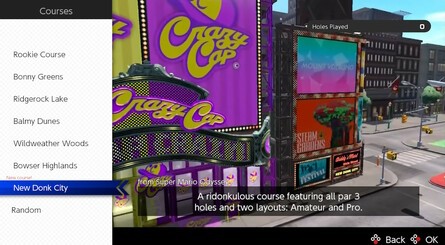 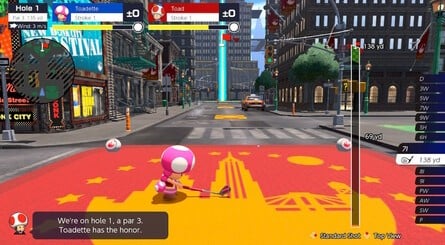 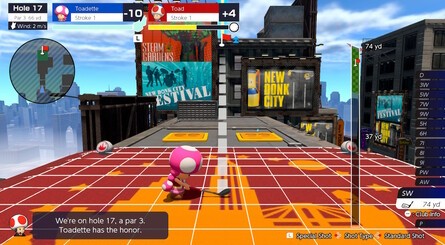 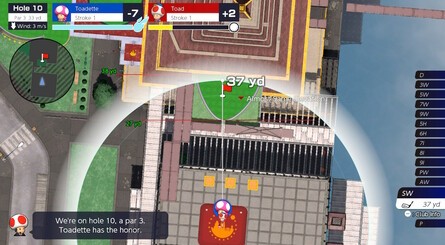 Nintendo announced this a little while ago, but it’s certainly fun to see the Super Mario Odyssey location recreated as a golf course. It adds something rather different and wacky to the line-up, which is very welcome indeed.

It’s a course exclusively made up of par 3 holes, so accuracy and working your way around urban obstacles is the focus. You can go through ‘Rookie’ or ‘Pro’ variations – Rookie holes are typically less than 100 yards, while on Pro there are some trickier variations and holes are longer.

What makes the course interesting is that the greens (hole) are patches of grass surrounded by the normal city, so you can try and shoot straight on and use a hefty amount of backspin, or try to use surrounding concrete and obstacles to bounce yourself close to the pin. It’s a nice spin and you can experiment with different strategies.

The 18 holes take you around a decent amount of the city, from ground level right up to shooting between skyscraper roofs. It’s rather good fun, with just one or two holes that flirt on the line of being ‘frustrating’ rather than just challenging. It’s an excellent free addition, though, for players of all levels.

Alongside New Donk City this is certainly the headline addition; in our original review we highlighted that while the online mode was functional and had good customisation options for playing with friends, there was no incentive to play against random opponents – unlike the Tournaments in Mario Tennis Aces. The Ranked Match mode fixes that, and certainly seems to us like a feature that may have been planned all along but wasn’t quite ready for the game’s launch.

If the userbase holds up, this mode offers multiple ways to play. Each month you aim to earn enough points to reach the A-grade, with the rewards in Month One being new Yoshi colour characters. Matches are always against three other players in the same category across three holes, with the courses rotating hourly. There are four categories to try, each with their own ranking points – Button Controls ‘Standard Golf’ and ‘Speed Golf’, and then Motion Controls ‘Standard Golf’ and ‘Speed Golf’. You can focus on one category or try to win in them all; just taking part will earn you ranking points, while higher finishes will naturally allow you to level up quicker.

And it’s pretty good, with a couple of caveats. On the positive side the user interface for choosing your category and jumping in is nice and clear, and the hourly rotation of courses is a fun touch. We can certainly envisage dipping in, enjoying an hour of quickfire games — three-hole rounds can be done in 5-10 minutes — and having a jolly time.

One minor complaint we had, as an example, was that in a round of standard golf special moves were enabled, so after one or two holes you could seriously disrupt your opponents. Once we figured this out, along with another player, there was a stand-off as no-one wanted to take the first shot, for fear of the next player following them and blasting their ball off the green. It can be a simple fix of turning these moves off in standard golf — they still make sense in the chaos of speed golf.

That minor weirdness aside it’s functional and fun, albeit the first month’s reward isn’t particularly exciting. As an addition to the game to add a little more value, though, it’s welcome.

Version 2.0 is a solid update for Mario Golf: Super Rush, and serves both to lure longer-term owners back and give newcomers more to enjoy. New Donk City gives a splash of extra creativity to the course line-up, while Ranked Match is a good addition for those seeking meaningful online play. We still feel Ranked Match is a step below Mario Golf: World Tour tournaments, and the equivalents in Mario Tennis Aces, but it does give some incentive to get back on course.

Have you tried out the Mario Golf: Super Rush update yet? Let us know your thoughts — or if these additions are tempting you to try the game for the first time — in the comments below.

If you’re looking for tips and tricks for Mario Golf: Super Rush, check out our appropriately named Tips And Hints For Mastering Mario Golf guide, as well as our Full Character Roster And Special Shot List and guide for How To Create The Best Mii In Mario Golf Super Rush.

Afrocenchix Received More Than $1 Million In Funding With Google's Help