Palisociety and North 45 Projects have preserved original details at this early 20th-century hotel in Portland, Oregon, which reopened this year as the Hotel Grand Stark.

Originally built in 1908, the building sits across the Willamette River from the city’s Downtown area and was formerly known as the Chamberlain Hotel.

Hotel Grand Stark takes its name from the intersection of SE Grand Avenue and SE Stark Street, where an ornate sign advertised the furniture workshop that had occupied the building for the past several decades.

Los Angeles-based hospitality group Palisociety recently took over the property, converting it back to its original use as a 57-room hotel. The guest bedrooms occupy the top three storeys, while the ground floor contains the hotel’s public amenities, designed in partnership with local studio North 45 Projects.

A new sign marks the entrance to the hotel, leading guests and local residents to the lobby-cum-art gallery that occupies part of the ground level.

The hotel’s dark green reception desk is set against a wall of orange Breccia Pernice marble. These elements and the lobby’s contemporary furniture selections contrast and complement the building’s original features, such as wood floors that were preserved throughout.

Off to one side of the lobby is a deli-style eatery with casual seating, while a bar at the back of the space is described as a “re-envisioning of the classic hotel watering hole”. 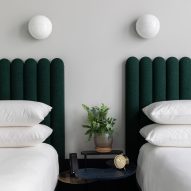 “Behind the front desk, guests will find the Study Hall, a bright, separate space designed to be a community work and meeting space that can also be used as a private dining room for intimate special events,” Palisociety explained.

Upstairs, the rooms were designed to with homey finishes that are meant to remind guests of a residential setting.

“A playful mix of millwork, textiles and patterns are layered throughout, combining florals, tartans and wovens to create dimension and personality in the space,” said Palisociety. “Vintage rugs and custom lighting add a residential-inspired element of comfort and style.”

The green of the reception desk also appears on custom millwork found in the guest bedrooms, as well as the staircase, deli, and tiles found in the study lounge.

Palisociety was founded by Avi Brosh in 1998 and focuses on a “locally inspired and neighborhood-centric approach to independent hospitality”.

Among Portland’s other accommodation options are a branch of The Hoxton hotel chain, the Woodlark Hotel occupying two landmarked buildings, and The Society Hotel in a former sailors’ lodge.

The photography is courtesy of Palisociety.