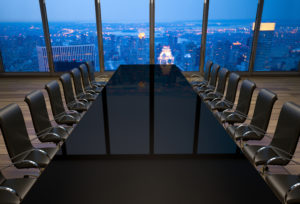 Get ready for more Black power in the boardrooms of corporate America.

Welcome to the 2021 B.E. Registry of Corporate Directors. Based on our editorial research team’s six-month analysis of Black board representation and participation at the nation’s largest publicly traded corporations, BLACK ENTERPRISE has once again produced our exclusive “Power in the Boardroom” report – the eighth such review over nine years. (BLACK ENTERPRISE did not publish its report and listing in 2020.)  As part of our proprietary process, our editors evaluated the entire universe of the S&P 500 to gain a complete and comprehensive picture of corporate diversity and inclusion at the highest level.

Check out these groundbreaking statistics that confirm this news: Among the S&P 500, there were 425 Black corporate board members at 399 corporations in 2021 compared to 322 such corporate directors at 307 companies in 2019. And the number of companies without Black board representation plunged, falling from 187 two years ago to 100 this year—a 47% decline.

That doesn’t mean that all S&P 500 companies have embraced a Black presence in corporate governance: African American directors are still noticeably absent from the boards of Agilent Technologies, Caesars Entertainment, Oracle, and Occidental Petroleum, among other such companies.

The significant 32% gain in Black board membership and 30% rise of companies with Black directors signaled a considerable breakthrough during a period marked by the devastating effects of the COVID-19 pandemic and a series of corporate equity pledges in response to last year’s worldwide protests against systemic racial inequality.

However, leading board diversity proponents say it is way too early to break out the party hats and horns. They contend that more significant action and change are needed.

Observers claim board diversity and Black leadership throughout much of corporate America remain weak. An ongoing challenge for decades, the number of Blacks in decision-making C-suite roles is still anemic. Of some 279 top executives listed in proxy statements, only five, or 1.8%, were Black, including two who recently retired, according to findings from a USA Today review of recent proxy filings.

Retired chair and CEO of BET Networks Debra Lee wants to reverse the trend. She and her partner, Rabia de Lande Long, this year co-founded The Monarchs Collective. The consultancy aims to help women and Black executives gain more board and C-suite positions. The racial mix of corporate boards continues to receive greater attention ignited by the murder of George Floyd and subsequent national Black Lives Matter demonstrations. A B.E. Registry member, Lee has been a force in corporate governance for more than 20 years.

Lee, who currently serves on the boards of Marriott, AT&T Inc., Procter & Gamble, and Burberry Group plc, told BLACK ENTERPRISE: “We are in an environment where companies are still looking for diverse board members. Some of them are fishing in the same pond that they’ve been fishing in for years.”

She adds: “I think some companies are trying harder, but they need to readjust how they approach this issue and where they find these diverse board members, and my view is there are plenty of them out there. You just have to have the network and know-how to reach them, and that’s one reason I started the Monarchs Collective. So, the pressure is going to have to be kept on boards and companies. And we’re going to have to keep raising this as an issue … systemic racism raised its ugly head in the boardroom last year, and boards had to discuss this.”

SEEKING TO CHANGE THE COMPLEXION AT THE HIGHEST LEVELS

In a BLACK ENTERPRISE interview, John Rogers Jr., chairman, co-CEO & chief investment officer at Ariel Investments, discussed his view on the status of Black board representation over the last year. “I have to say that African Americans are getting opportunities to be on boards in unprecedented levels. Everyone sort of jumped on board, and people realized it’s really critical to do the right thing after the assassination of George Floyd and all the turmoil and heartbreak in our country.”

Rogers maintains that “private equity is finally getting religion and doing the right thing.” Over the past 18 months, industry leviathans like KKR, The Carlyle Group, and Apollo Global Management have appointed African Americans corporate and business leaders to seats within their boardrooms. He further states that this development may lead to more Russell 2000 companies actively recruiting and placing African American directors on their boards.

An area that is lagging within corporate governance is Black board leadership. Among those listed on our 2021 Directory, we only found seven Black chairs and 10 Black lead directors on the S&P 500 boards.

Rogers also admits there are still challenges with Black C-suite representation at public and private companies, including those private equity firms control and plan to take public. “So, in general, the CFOs, and CEOs are still dramatically all white males in these private companies,” he says. “They haven’t had the kind of things that we’ve seen now in the biggest companies in America, where you’re having Black women CEOs.”

Significant progress was recently made with Blacks being named chief executives of some of the nation’s largest publicly traded companies. In January 2021, former Starbucks COO Rosalind “Roz” Brewer was named CEO of the mammoth pharmacy chain Walgreens Boots Alliance Inc. The appointment made Brewer the only current Black female CEO among S&P 500 companies.

In February 2021, TIAA named Thasunda Brown Duckett as president and CEO. The appointment made the former CEO of Consumer Banking at the nation’s largest banking institution, JPMorgan Chase, the second Black woman to lead one of the nation’s largest publicly traded companies.

Qurate Retail Inc., whose brands include home shopping networks QVC and HSN, brought aboard David Rawlinson as its president and CEO, which became effective Oct. 1.

Another interesting development is the composition of white female board representation versus Black male board representation, according to findings from the Missing Pieces Report: A Board Diversity Census of Women and Minorities on Fortune 500 Boards. The Alliance for Board Diversity organized the study, which includes four distinct leadership organizations—The Executive Leadership Council (ELC), comprised of Black senior executives; Hispanic Association of Corporate Responsibility (HACR): Leadership Education for Asian Pacifics (LEAP); and Catalyst, focusing on women executives—in collaboration with accounting giant Deloitte. Public filings were examined up until Jun. 30, 2020, for a year-over-year comparison.

“There is no doubt that the spotlight on racial inequities for Black executives in corporate America last year spurred momentum to diversify corporate boardrooms,” Michael C. Hyter, president and CEO, The Executive Leadership Council, states in the report. “The real question is, are we experiencing a trend, or is this the beginning of sustainable progress? Although Black women continue to gain board seats, the loss of board seats by Black men is alarming. Board diversity in the Fortune 500 is growing at a rate of 2%, which is not quickly enough. On top of that, the recycle rate among Black directors remains high. If corporations are serious about achieving true board diversity, they must be intentional about reaching outside of their traditional networks and tapping the plethora of qualified, Black board-ready executives who are ready to serve.”

BE reports on Black board representation based on the S&P 500, which is listed by market capitalization, instead of the Fortune 500, which identifies the largest publicly traded corporations based on annual revenues. Our 2021 roster is derived from researching companies on the S&P 500 based on market capitalization as of Apr. 9, 2021, and identification of board appointments and configurations among that universe up to Sept. 30, 2021.

Since our last corporate board report in 2019, there has been the enactment of a plethora of new actions, laws, and policies tied to corporate board diversity. For instance, last August, NASDAQ received the federal green light to include race and gender in its board diversity disclosure listing rule. The U.S. Securities and Exchange Commission (SEC) approved a new policy requiring most of the roughly 3,000 companies listed on the exchange to have at least two diverse directors – one self-identifying as female or from an underrepresented minority or as LGBTQ+.

The push for corporate America to focus on this issue has increased and changed dramatically. Byron Loflin, global head of board engagement for NASDAQ, said during BLACK ENTERPRISE’s virtual Corporate Board & C-Summit that there has been a shift from the focus on management to governance.

He asserts: “We’ve transitioned over the last many years toward a governance era. And in the last year, the conditions that confronted society around the pandemic, around George Floyd’s murder, around various other events over the last year, I think it moved or accelerated the focus of governance.”

Simultaneously, institutional shareholders—including huge asset management players like BlackRock and State Street—now demand companies represented among their investments to report on the status of corporate governance inclusivity and take specific measures to diversify their boards.

Goldman Sachs this year declared it would not take a U.S. or European company public if they don’t have at least one diverse director—though the focus is on gender. More than 12 companies such as Zillow and M.M.LaFleur vowed in September to add at least one Black director to their boards within a year.

On the legal front, California Gov. Gavin Newsom signed a law last fall requiring publicly traded corporations based in the state to include corporate board members from underrepresented communities. BLACK ENTERPRISE reported that the measure represents the first in the nation to dictate the racial composition of corporate boards and was inspired by a 2018 state law requiring publicly held corporations to diversify their all-male corporate boards. The gender law, SB 826, faces legal challenges from conservative groups, and a trial will begin on Oct. 25.

THE BOARD CHALLENGE INITIATIVE MAKING A DIFFERENCE

Another influential force has been The Board Challenge, a recent initiative that encourages every U.S. company to pledge to have at least one Black director. It also asks them to sign a pledge to show support and apply resources to engage in change.

Guy Primus, a co-founder of The Board Challenge and CEO of Valence, told BLACK ENTERPRISE most corporations currently seek diverse boards. He added, “they might not know the flavor of the diversity they’re looking for, but they want diverse thought.”

Primus says that was the focus of the Board Challenge and was able to get more than 100 entities to commit because they already had a Black board director. More importantly, he found 25 companies without a single Black corporate director to appoint one within 12 months.

NEW STEPS TO CONSIDER FOR ADDING BOARD MEMBERS OF COLOR

Experts say companies often report they can only bring diverse candidates aboard when board seats become open. However, despite the continued push for greater diversity in corporate governance, many veteran board members continue to nominate themselves when their term ends. Many do not want to exit from their seats, given the pay, stock options, and other perks that come with board membership.

Black board representation, however, is vital beyond compensation. Consider that a large chunk of revenue and profits come from the Black community, accounting for 13% of the nation’s population. So, diversity advocates ask shouldn’t boards reflect that? Also, board members review hiring practices and policies that can help ensure the recruitment and elevation of Black executives. Moreover, Black board members can question the use of procurement spending with Black-owned suppliers. “There are lots of issues that come up over the years when you’re on a board, and the more diverse the board is, the more substantial,” Lee says. “And the more informative those conversations will be. And the more diversity of thought you have, the better companies perform.”

Our Step-by-Step Guide to Making a Holiday Budget