American firm Parnagian Architects has released images of a conceptual house lifted on stilts above a site in coastal New Jersey that was hit hard by a hurricane.

The Salt Box Residence is planned for a flood-prone salt marsh in Mantoloking, a small community located on a strip of land between the Atlantic Ocean and Barnegat Bay.

The home was conceived as a replacement for a dwelling that was damaged by Hurricane Sandy, which struck the area in 2012.

“The client’s brief was to design a lasting replacement for a multi-generational family home that had been damaged beyond repair during Hurricane Sandy,” said Parnagian Architects, which is based in the nearby town of Red Bank.

The conceptual home sits at the tip of a small peninsula that is bounded on the west by a commercial shipyard and a marina. The other sides of the property look towards the water.

Encompassing 2,400 square feet (223 square metres), the dwelling rises three levels, with the ground floor being mostly open to the air.

Due to a local ordinance, the home’s footprint had to match that of the prior dwelling – a constraint resulting in the design of a slender, rectilinear home.

“Slight internal shifts in plan and volume create spaces for both retreat and gathering,” the architects said.

Wrapping the home’s exterior will be a screen made of Atlantic white cedar boards that alternate in width. The brise-soleil helps mitigate solar heat gain, while variations in its porosity create an interplay of light and shadow within the home.

The wood is meant to age gracefully over time.

“The cedar weathers to a natural grey, a subtle design move to give it the appearance of having always been there,” the studio added.

Due to potential flooding, the home’s living spaces are lifted above the site.

The foyer is located on the ground level, alongside a covered parking area and an outdoor shower.

The first floor holds a bedroom and an open space for cooking, dining and lounging. Large expanses of glass help the interior feel connected to the surrounding terrain. 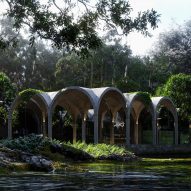 “An open living, dining and kitchen area is considered as an ‘outdoor room’ with a double-height volume and floor-to-ceiling glass, inviting inhabitants into the landscape,” the team said.

The main living space flows onto a glass-lined terrace, where a staircase connects to the ground level.

The top floor encompasses three additional bedrooms, along with a study and laundry facilities. The study overlooks the floor below.

Interior finishes include white oak flooring and joinery and white-painted plasterboard and cement board. Cedar clads both the ceiling and an exterior soffit.

On the home’s gently sloping roof – which is exposed to the southwesterly sun – the team has envisioned a photovoltaic array that will generate power for the dwelling.

The Jersey Shore is a popular summer getaway for urban dwellers in the New York City metropolitan area. Other projects there include a beachfront house by Jeff Jordan Architects that comprises boxy, cedar-clad volumes and multiple terraces.

The imagery is by Parnagian Architects.