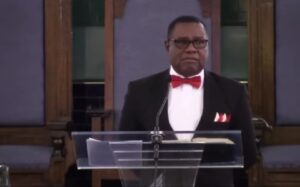 Days after a video surfaced of a controversial sermon during which Bronx pastor Dr. Burnett L. Robinson seemed to advocate for spousal rape, the Seventh-Day Adventist Church has stripped him of his title permanently.

Robinson made his controversial remarks during a Nov. 13 sermon which was shared to YouTube on Nov. 22. He was expounding on the idea that wives should “submit to your own husbands, as to the Lord,” as the apostle Paul wrote in his Letter to the Ephesians.

“In this matter of submission, I want you to know upfront, ladies, that once you get married, you are no longer your own,” Robinson said to his congregation. “You are your husband’s. You understand what I’m saying? I emphasize that because I saw in court the other day on TV where a lady sued her husband for rape. And I would say to you, gentlemen, the best person to rape is your wife. But then it has become legalized.”

By Nov. 24, Robinson had resigned.

“The Greater New York Conference of Seventh-day Adventists recognizes many have been deeply harmed by the sentiments expressed by Robinson,” the organization said in a statement posted to its website. “The views he expressed are wrong and not accepted by our church. Rape and sexual assault of women are crimes and should always be treated as such. We will continue to educate and counsel all pastors, seminary students, and staff to fully understand that this type of rhetoric is abhorrent and unequivocally unacceptable.”

The Church’s communications consultant, Kevin Lampe, says that Robinson has been stripped of his title and will not be able to serve at another Seventh-Day Adventist Church.